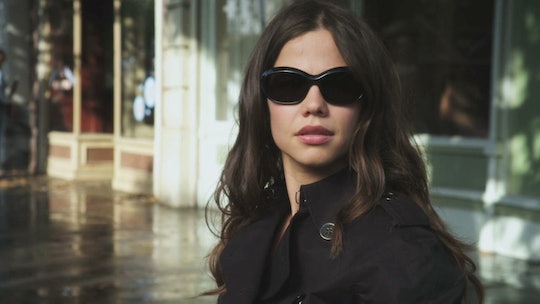 Is Jenna Uber A On 'Pretty Little Liars'? It's Totally Possible

Jenna Marshall is coming back to Rosewood! Tammin Sursok, who plays the blind victim turned villain on Pretty Little Liars, has confirmed via social media that she will be back for Season 7. It's unclear what Jenna has been up to during her time away, but there's no doubt that if she's back that means trouble for the Liars. The last time we saw Jenna on the show was back in Season 5 at the Masquerade Ice Ball and there's even been a time jump since then, so she's been gone a very long time. Does the return of Jenna mean that she's the real Uber A on Pretty Little Liars?

It's very possible. Just because we didn't see Jenna onscreen doesn't mean she wasn't doing things offscreen. Jenna could've been pulling the strings on all the terrible things that happened to the Liars from a distance, letting her minions do her dirty work for her. There's still so much we don't know about Jenna, and her overall sketchy behavior makes it clear that there's probably a lot more to Jenna than we realize. Plus, Jenna has been there from the very beginning and when it comes to motive for wanting to terrorize the Liars, Jenna has plenty.

First, Alison bullied her because Jenna was new to school and rivaled Ali's popularity. Then, in an act of revenge, Ali, along with the Liars, pranked Jenna with a stink bomb that made Jenna blind. Jenna also isn't a fan of the Liars because of her feelings for and possessiveness of Toby, who dated Spencer and became friends with Emily.

There's really no love lost between Jenna and the Liars and it wouldn't be surprising if she was really the one tormenting them this whole time. There is, however, one issue with this theory. If Uber A is also A.D., A.D. wants to know who killed Charlotte — but why would Jenna care about that? Jenna was afraid of Charlotte, also known as CeCe Drake, and in Season 4 it was Charlotte that knocked Jenna unconscious and left her for dead in the lake. Jenna would want Charlotte dead, and she may very well be Charlotte's killer, therefore it doesn't make sense that Jenna is A.D.

Still, with Pretty Little Liars one can never be too sure. Whether Jenna is Uber A or not, she'll definitely be stirring up some trouble when she returns to Rosewood.