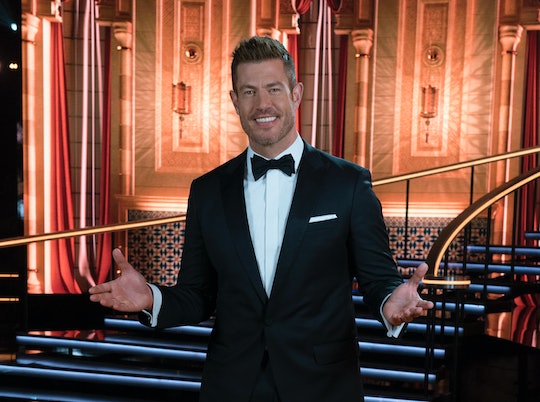 This summer, the creator of The Bachelor is bringing a new dating competition show to ABC called The Proposal, in which ten women will compete for the heart of a mystery suitor. It's hosted former NFL quarterback and Bachelor Jesse Palmer, so it's totally within the Bachelor Nation wheelhouse. By the end of the show, the suitor and one woman will presumably find love. But what about the host? We kind of want to know if Jesse Palmer is single or not this long after his journey for love all those years ago.

Palmer is a self-described "OB," or Original Bachelor, according to The Daily Mail, and he does have a point. He was the Bachelor on Season 5, which seems like eons ago, and ended up choosing Jessica Bowlin. You really have to be a superfan to remember this stuff. In case you aren't, all you have to know is that he didn't propose on the show and they broke up just weeks after the finale.

Since quitting the NFL and leaving the Bachelor franchise, he's been hosting television shows such as Daily Mail TV and segments on ESPN and Good Morning, America. And, yes, he's found love again. According to Life & Style, and some Instagram stalking, Palmer is now dating Brazilian model Emely Fardo and things seem pretty serious.

It's not clear when they started dating, but their travel selfies go back pretty far. In addition to modeling, Fardo is also a food photographer, and she and Palmer seem to do everything together. Whether it's dining out, lounging on beaches around the world, or even hitting the gym, they seem really happy, which is always nice to see.

He and Bowlin were never really meant to be anyway. Palmer told Parade that before he was on the The Bachelor, he had no idea what it was. He said, I "had never actually seen it. I guess I was naive in the sense that I didn’t know just how big it really was. It was a tremendous experience, but going into it, I certainly wasn’t prepared.” So if you're holding any old grudges against the guy — don't. He had no idea what he was doing.

Palmer also said that it was a great experience, but that he wouldn't do it again. "It's a fantasy," he said. The former quarterback added, "You set the bar too high because you can’t take helicopter rides all the time. I didn’t propose to [Jessica Bowlin]. We did date, but it didn’t last very long.”

However, Palmer seems to be doing really well with his girlfriend and career at the moment. He said in the same interview that he misses playing football but found a sweet spot on television. Palmer said:

I’m so lucky to have this job [as a TV host]. It’s awesome to talk about football. It’s my passion. I’m working for a great network and the guys and girls I work with are fantastic. When I get into the car and drive to work, I actually look forward to it. It’s every guy’s dream job.

Branching out from sports to The Proposal seems like a great move for him, because it's pretty competitive. On the show, which premieres June 18, ten women will try to win over Mike, a police officer from California. The catch? No one can see him. He'll ask them questions, parade them around in "beachwear," and even introduce his family to them. At the end of the show, Mike will pick one of the women and hopefully propose to them, all under the watchful of Palmer.

He'll be a good judge, given that his current relationship seems to be full of love. What better host to help a bunch of women try to woo a mystery man?

More Like This
Pregnant Keke Palmer Is Worried Her Suddenly Clingy Cat Is Contemplating “Murder”
Keke Palmer Casually Drops Her Baby's Sex On Jimmy Fallon
The 20 Most Romantic Quotes From Friends
When Does 'Yellowstone' Season 5 Come To Peacock? Not Soon Enough
What Parents Are Talking About — Delivered Straight To Your Inbox