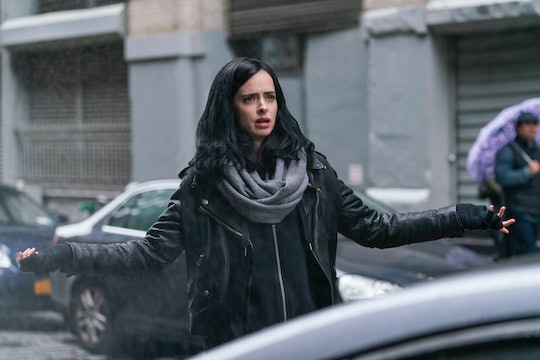 Jessica Jones & The Punisher Would Make A Great Team

The Punisher is now on Netflix and while fans are very excited to see Frank Castle in his own series, others are wondering how it'll connect to the other Marvel Netflix shows. It's already been confirmed Karen Page will be in the new series, but will anyone else from the previous series show up? Specifically, is Jessica Jones in The Punisher? Unfortunately, it doesn't look like you'll be seeing her in this Netflix series.

The last time fans saw Jessica, she was sharing a drink with Luke at a bar after the Defenders' team up led to the defeat of the Hand and the "loss" of Matt Murdock, who fans know is actually alive in a nunnery somewhere. Jessica and Frank have never met, though they both live in New York City, something that's not all that strange since the city is filled with millions of people. Still, it would've been interesting to see the two vigilantes interact.

Although Jessica certainly isn't into weaponry like Frank, she's probably closest in personality to him than the other Defenders. I'd imagine Jessica would totally understand Frank's distrust of the government and want for revenge. The two could actually make an unstoppable team, and it'd definitely be a funny team up with Jessica's sass mixing with Frank's tough guy attitude. Unfortunately, there's been no mention of Jessica popping up in The Punisher, but you never know. She could make a surprise appearance.

Even though Jessica (probably) won't be in The Punisher, you won't have to wait that much longer to see her again. The second season of her titular show is scheduled to release sometime next year, though there's been no official release date announce yet. However, the season did finish filming already so it shouldn't be too late in the year before Season 2 comes out.

As for The Punisher, it looks like Karen may be the only crossover character in the whole series. Not even Claire Temple, who's been in every Marvel Netflix series so far, will be making an appearance. Unfortunately, actress Rosario Dawson, who plays the iconic nurse, just couldn't make the filming schedule work this time around. Of course, it's always possible some minor characters might make a small appearance, like Foggy Nelson, who's friends with Karen, or Jeri Hogarth, who Foggy now works for. The only way to know who drops by is to watch The Punisher, because if there are any other appearances, Marvel is staying tight lipped about it.

Whether or not there are cameos, The Punisher is worth a watch anyway since Frank's story is an interesting one. After finding out who was behind the murders of his wife and children, he then uncovered a huge government conspiracy that traces back to his days in the military. He'll team up with David Lierberman, better known as Micro, who is a hacker that is hiding out from the world until he can solve it. Differently than Frank, Micro's family is still alive but they believe he's dead. This was Micro's way of trying to keep them safe.

The show will also follow Frank's former best friend from his time with the Special Forces, Billy Russo. Billy founded and is the CEO of a private military corporation called Anvil, and if I had to guess, I'd say he'll be at least one of the foes Frank has to go against this season (though that's just a hunch on my part).

The Punisher will show Frank facing the demons of his past and may even see him figuring out a different way of solving his problems than just going in guns blazing. You can see what Frank is up against now that The Punisher is streaming on Netflix.