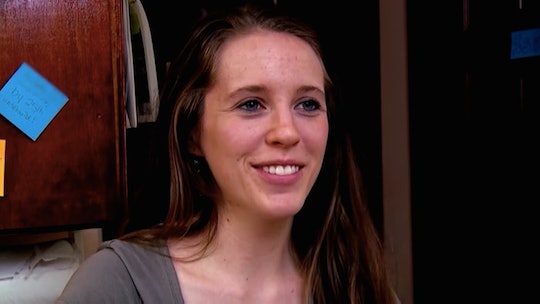 Here's What Jill Duggar Does Outside Of Reality TV

When not on screen with TLC, many members of the Duggar family work in fields outside of the reality TV world. Following their interests and passions just like anyone else, the Duggars have dabbled in politics, photography, and even childbirth. For example, according to Us Weekly, Jill Duggar is a midwife and she planned to use her skills to give back while serving abroad with her church.

Her husband, Derick Dillard, announced on Sept. 16, 2015 that his wife had survived an intense seven-hour comprehensive exam for Certified Professional Midwives. Having reportedly passed the test with flying colors, she was officially "Jill Dillard, CPM." In his post to the family blog, Derick expanded on Jill's success and took the opportunity to brag a little bit. “I am so proud of her for her diligence, perseverance, and hard work to see this long road through to its end and reaching her goal of becoming a CPM," he wrote on the couple's website.

The news that Jill is a midwife comes as no big surprise to her loyal followers who have watched her love for midwifery grow throughout the years as she helped to deliver babies in her Arkansas home. For those who haven't kept such close tabs on Jill's journey to becoming a midwife, she and her sister Jana wrote a guest post for the TLC blog that outlined their experience in their field.

In the blog post, Jill explained that she was receiving a lot of hands-on experience at school and learning even more. She wrote:

Since I've started down this path to become a midwife, I've had the privilege of attending the births of over 60 babies! Each birth is incredibly unique and special, and I learn something new at every one of them. Not everything is peaches and cream, and some days are hard, but I have been blessed to work with a great group of ladies.

That same post gave Jill the opportunity to touch on the important role that midwives fill in the birthing process. She explained that she and her fellow midwives are there to look out for everyone's health:

The main goal of our practice as home birth midwives is to make sure that both momma and baby are healthy. Sometimes that happens in the home, and sometimes it happens at the hospital, but wherever we are, we pray for the best possible outcome for the people we serve.

Along with the announcement and a little bit of bragging, Derick's post also told readers that Jill's certification and skills would come in handy during the couple's missionary work in Central America, which ended in 2017. Along with giving Jill the chance to keep her skills fresh, time overseas will also put her at the disposal of those who need her most.

The World Health Organization reported that midwives "play an instrumental role to introduce women to the health system and ensure that women and their babies receive a continuum of skilled care" both during and after pregnancy. Despite the numerous benefits of midwives, millions of women around the world give birth without the necessary support and medical care. Francis Day-Stirk, president of the International Confederation of Midwives, told WHO, "When they are properly trained, empowered, and supported, midwives in the community are the most cost-effective solution."

It isn't clear from her posts or recent news reports just how often Jill is practicing as a certified midwife now, though she did post a photo in 2016 that she helped during a home birth, presumably in the United States. "I got to help deliver this little cutie this morning! So special!" she captioned the above photo.

Regardless of whether she's helping deliver babies on a daily basis or every once and a while, her commitment to midwifery is evident.