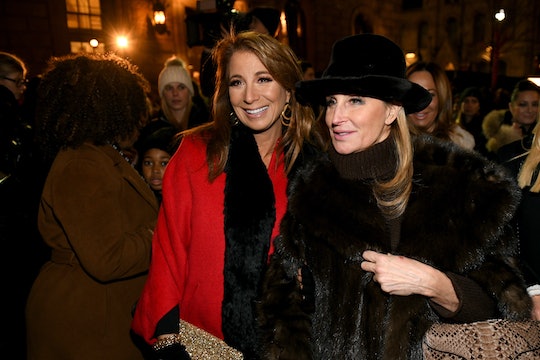 Here's What We Know About Jill Zarin's Return To 'RHONY'

Last year, RHONY fans watched what felt like the impossible happen: mortal enemies Jill Zarin and Bethenny Frankel had a moment of reconciliation, on camera, at Bobby's funeral. It prompted tons of speculation that perhaps Jill Zarin would return to Real Housewives of New York, and she does briefly pop up in the Season 11 trailer! But it's been confirmed that Jill is returning in a "friend of the Housewives" capacity only — not as a full-time cast member. And based on recent interviews, it sounds like that's exactly where Jill wants to be.

"I would like to come back as a friend," she told E! News back in July, shooting down rumors that she'd been in talks with Bravo. "I couldn't do it for many years because of Bobby, and I was talking care of him. But now I have the time. And I think Luann needs me."

Luann de Lesseps is, of course, a few months out from her second stint in rehab, a trip that wound up preventing her from participating in the RHONY Season 10 reunion show. Jill and Luann — both OG Housewives, along with Bethenny — have remained close, and it sounds like Jill was a major source of support during her past tumultuous year. But, in my opinion, this storyline might backfire on Jill.

The fabric empress has always been a motherly figure on the show, from taking a young, broke Bethenny under her wing to always using her formidable networking skills to help people. Jill loves to be needed. But returning to RHONY in this capacity feels a little bit like a step backwards into Jill's same old toxic patterns. Pouring all her effort and energy into building up Bethenny ultimately left her feeling jilted when her protégé didn't need her anymore.

Personally, I'd love to see Jill move past the maternal martyr routine and into an identity as her own person — a person who holds good boundaries and lets herself have needs too. On a positive note, it sounds like this season might give her the opportunity to evolve. TMZ reported that Jill's storyline this season will focus heavily on her new boyfriend Gary Brody, with whom she's already living in Manhattan.

Said Jill in her E! interview:

He's really good to talk to. He doesn't mind when I talk about Bobby — I talk about Bobby all the time. I refer to things that he said and there are little things, you know, 'Bobby would do this.' He loves hearing about it, he actually respects him, he's younger than Bobby was and he's heard so many great stories of what a mensch, you know, Bobby was, amazing, he's one of a kind, and I think he...looks at him as an inspiration kind of guy.

I, for one, am super here for this relationship development. It sounds like Jill found a deeply caring and understanding new partner in the face of her first year as a widow, which is no easy feat. You can keep an eye out for Jill's new beau when RHONY returns to Bravo on Mar. 6.