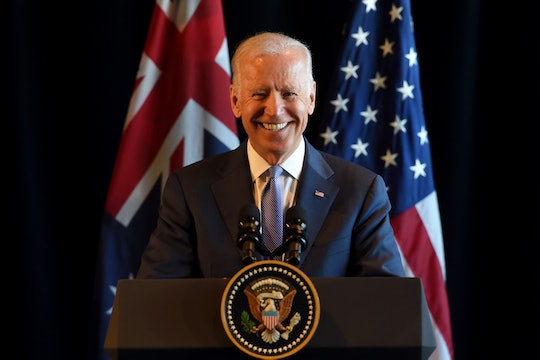 After many months of wondering will he or won't he, Joe Biden announced he's running for president in 2020. On Thursday morning, the former VP posted a series of photos on Instagram — spelling out "Biden" and "President" — officially announcing his presidential campaign.

In addition to his Instagram reveal, Biden also posted a video on YouTube explaining why he's running for president. According to The New York Times, Biden did not discuss his specific views on policy or his background, but he touched on President Donald Trump's comment about the 2017 white nationalist march, also known as the "Unite the Right" rally, which sparked a counter-protest, in Charlottesville, Virginia. A 32-year-old woman named Heather Heyer was killed after a car driven by "neo-Nazi" James Alex Fields Jr., who's since been convicted of murder, rammed into her and a group of counter-protesters, according to USA Today.

At the time, according to The Atlantic, Trump said, "You had many people in that group other than neo-Nazis and white nationalists... The press has treated them absolutely unfairly... You also had some very fine people on both sides."

Recalling that comment in his video on Thursday, Biden said, "I knew the threat to our nation was unlike any I’d ever seen in my lifetime.”

"We are in the battle for the soul of this nation," Biden continued, as The New York Times reported, adding:

I believe history will look back on four years of this president and all he embraces as an aberrant moment in time. But if we give Donald Trump eight years in the White House, he will forever and fundamentally alter the character of this nation, who we are, and I cannot stand by and watch that happen.

As noted on his campaign website, Biden's presidential platform — among others issues, of course — also appears to be aimed at building up the middle class.

"The middle class isn’t a number — it’s a set of values," his campaign site reads, along with a subtle dig at the current POTUS. "Owning your home. Sending your kids to college. Being able to save and get ahead. Across the country, too many families are being left behind. The next president needs to understand what the current one doesn’t: In America, no matter where you start in life, there should be no limit to what you can achieve."

So now that Biden has thrown his name into the "large and diverse field" of Democrats running for POTUS 2020, as CNBC noted, what are his chances of making it to the White House? According to CNN, 76-year-old Biden's "probably got the best chance" due to his steady lead in the polls, recently as well as in the past. In fact, as CNBC reported, despite his campaign launch coming fairly later than others, Biden has "consistently led polls" ahead of Democratic favorites, such as Sen. Kamala Harris and Mayor Pete Buttigieg as well as Sen. Bernie Sanders.

Biden's older age, however, might not be in his favor, as CNN reported. Additionally, Biden was recently accused of "inappropriate touching," according to HuffPost. Though he's already responded, CNN noted he "cannot afford to alienate female voters," so that is something he will likely need to address again.

The 2020 presidential election is inching closer by the day and Americans will undoubtedly be keeping a close eye on all of their options.