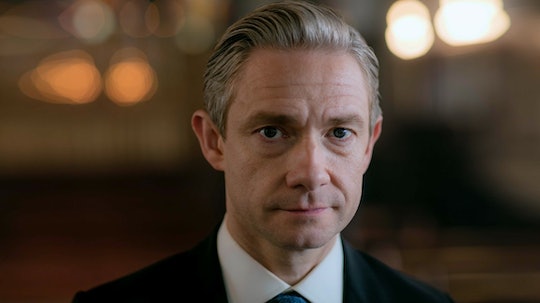 To say that John Watson has been put through a lot during Sherlock Season 4 would be a bit of an understatement. The man has lost his wife, feels guilty about emotionally cheating on her right before she died, and is constantly having to look after Sherlock whether he likes it or not. But it's like the age old saying goes: no matter how bad things are, they can always get worse, which proved to be the case during Sunday night's episode "The Lying Detective." So is John Watson dead on Sherlock? The final few moments of the episode found the good doctor being held at gunpoint by none other than the third Holmes sibling, Euros. And considering how this series has more than proven its lack of fear in killing off main characters, it's understandable if you're feeling slightly worried for John's fate.

Truthfully, I think John will turn out to be just fine for now. The threat of his safety was probably just a ploy to get us to tune in next week (as if we would rather do anything else). Plus, Mary was just killed off the week before, so it feels unlikely the show would once again murder such an important character so soon and by gunpoint yet again. I mean, if you're going to kill multiple people off at least have it be in different ways.

After John's new therapist revealed her true identity as Sherlock and Mycroft's sister (and the woman whom he flirted with on the bus in the premiere), she pulled out a gun and threatened to put a hole in his head right before pulling the trigger. But don't take that to mean that John is definitely dead because I very much doubt that will be the case. This wouldn't be the way John would go. It would be too cruel even for Sherlock, though, the series is definitely not holding back any punches this year.

There is so much we don't yet know about Euros and I have a feeling John may be our means to getting some more insight into her character by means of talking. And since he needs to be alive in order for a proper dialogue to occur, I think he'll be safe for now. Odds are she either misses on purpose or John manages to duck out of the way before the bullet gets near him. Either way, I'm fully confident that John will live to see another day. He's certainly been in sticky situations like this before and managed to come out unscathed. Granted, none of those situations involved Sherlock's sister, who seems to be a bit of a wild card, but still. Like I said, there's so much more to explore with this dynamic.

But even if he is alright, that doesn't mean he's out of danger. He's still Euros' captive for the time being, so let's hope that Sherlock can put the pieces together fast enough in order to save his friend's life. But if anyone is up to the challenge, it would be Sherlock Holmes.