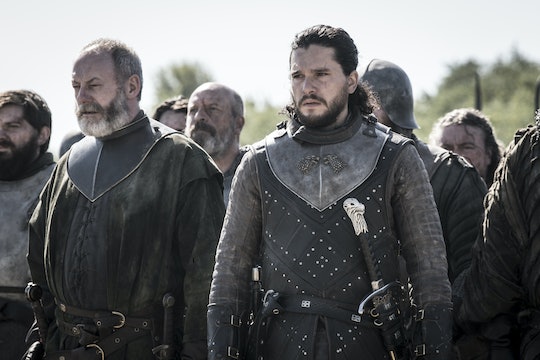 Game of Thrones unleashed an epic battle upon King's Landing in its penultimate episode with Daenerys seeking to take the Iron Throne from Cersei once and for all. But things went off the rails when Dany refused to acknowledge Cersei's surrender and burned the city to the ground anyway. Viewers lose track of Jon midway through the episode, prompting fans to wonder if Jon is dead on Game of Thrones. Considering the extreme unlikelihood that Jon Snow would get an off-screen death, I think it's safe to say the rightful heir to the Iron Throne is still very much alive.

Various roundups tracking character deaths from the Battle at King's Landing count Jon Snow as a survivor, including ones from Vox, The Hollywood Reporter, and Harper's Bazaar. The last viewers see of him in the episode, Jon is commanding his men to fall back after Dany lays waste to King's Landing. He has to get them out of the city they came to siege if they're going to survive, despite having won the battle, which is obviously some mixed messaging for a leader to give. Jon, who appears to be losing plenty of his own men to dragon fire and building collapses, is clearly frustrated by the situation. But after that moment, the show follows the demise of the Clegane brothers and the Lannister twins, intercut with footage of Arya trying to escape on the ground as the city crumbles around her. Jon is missing from the action.

Showrunners David Benioff and D.B. Weiss explain the reasoning behind spending their final few sequences with Arya in the capitol, as opposed to giving us other character updates, in HBO's post-show featurette. Says Weiss:

In most large stories like this, it seems like there's a tendency to focus on the heroic figures, and not pay much attention to the people who may be suffering the repercussions of the decisions made by those heroic people. We really wanted to keep our perspective and our sympathies on the ground at this moment, because those are the people who are really paying the price for the decisions that [Dany] is making.

Benioff goes on to explain that following a beloved character like Arya through the apocalyptic levels of destruction gives fans a deeper emotional investment in what's happening, as opposed to watching "a bunch of extras" run around.

Meanwhile, assuming he's survived, Jon has a harrowing moment of reckoning coming his way. When Dany ignores Cersei's surrender, her soldiers take it as carte blanche to do whatever they want, despite Jon's orders to stand down. He even winds up killing one of his own men who appears to be on the verge of raping someone. Jon has completely lost control of his armies, and, as Benioff and Weiss point out, he realizes can't impose his own moral compass on every soldier under his command.

It's hard to see how he can keep pledging fealty to Daenerys after all that, but the consequences if he doesn't are equally dire. My sense is that Dany and Jon can't both survive the series finale, but it remains to be seen which one of them makes it out alive.