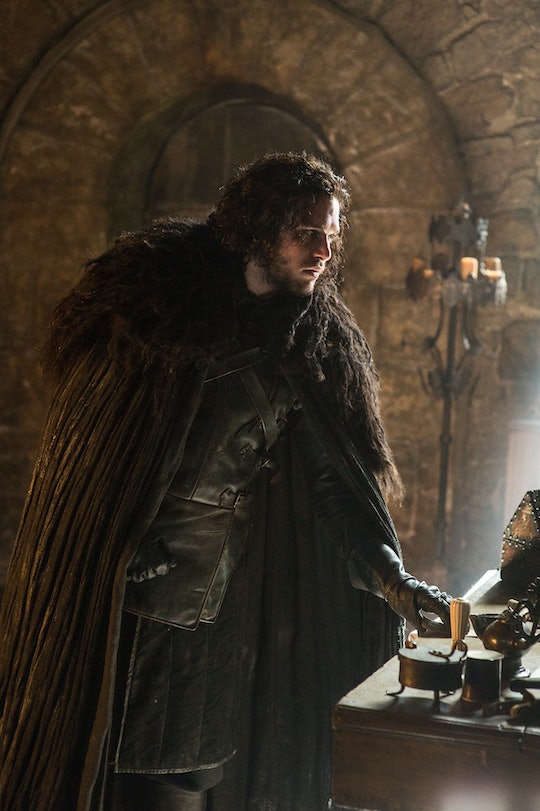 Is Jon Snow Azor Ahai On 'Game Of Thrones'? There's A Lot Of Evidence Suggesting It

Even though it was something many fans were certain would come to pass, let's all take a deep, relieved breath: Jon Snow is alive again on Game of Thrones. Despite the fact that so many people had a sneaking suspicion that scarlet witch Melisandre would bring him back from the dead, it's still pretty sweet to have a beloved character not be gone for good. His return is a big deal, proving Jon's immense significance to the narrative and possibly foretelling something important about Jon's destiny. Jon's resurrection hints at him being the fulfillment of a long-held fan theory that concerns a prophesied warrior. Is Jon Snow Azor Ahai on Game of Thrones?

Now, unless you're deep in the fandom, your first question probably is: who the hell is Azor Ahai? Book fans have had longer to percolate on this particular prophecy, but the show hasn't shied away from mentioning him, though it's easy to lose track of a name or two on a show as heavily populated as Game of Thrones. Azor Ahai, also referred to as "The Prince Who Was Promised," was a warrior with a flaming sword called Lightbringer who was supposed to be reborn to fight the White Walkers and essentially save the realm.

He's important to followers of R'hllor like Melisandre, who spent most of her time on the show believing Stannis was Azor Ahai. However, it's looking more and more like that mythical figure might just be Jon Snow. In addition to the whole coming back to life coincidence, Melisandre has had visions wherein she asked her god to show her Azor Ahai and instead saw "only Snow." There's also the fact that one of Azor Ahai's major checkpoints is that he fights White Walkers with a cool sword – something Jon has already proven himself an expert at.

Another of the attributes usually associated to Azor Ahai is "waking dragons from stone," which isn't exactly in Jon's wheelhouse as of yet. However, if theories about his parentage are true, then he may have Targaryen blood, making his connection to dragons a little stronger than it seems at first glance. It's possible that he could "wake dragons from stone" by discovering who he is; in that case, he would be the dragon that was waking from ignorance to self-discovery.

Even if Jon Snow doesn't turn out to be Azor Ahai, he's still indisputably important to whatever is going to happen in Westeros going forward. Returning to life is a pretty major sign that his business is unfinished and he's going to do something major. Just what that is, viewers will have to wait to find out.