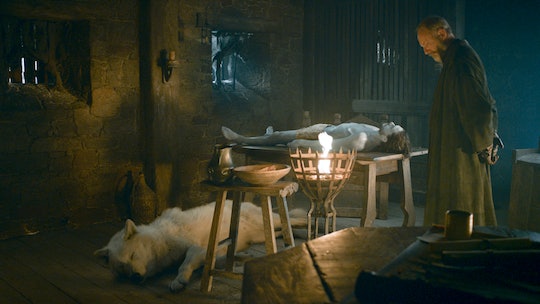 If you are one of countless fans still sitting, jaw-dropped and immobile, in front of your TV after Game of Thrones' second episode of Season 6 entitled "Home," then first, please hydrate, have a snack, and take a shower, and then try to find some relief from the shock of Jon Snow's improbable but likely resurrection with some solid text-based theories. While it looked at the end of "Home" like Melisandre had successfully resurrected Jon Snow using magic, the camera lingers on his direwolf in such a way that had fans wondering, is Jon Snow's life tied to Ghost?

Ghost is the last person left in the room with Jon after Melisadre, Ser Davos et al abandon the body under the impression that she's failed at reviving him. The camera cuts from Jon's body to Ghost, who goes from peacefully passed out on the floor near his master to perking up and looking expectantly up at him just before Jon takes those fateful, gasping breaths. So did Ghost have something to do with the resurrection, or were his keen canine senses just picking up on his master being close again? All the Stark children have tight bonds with their very intelligent direwolves.

After being split up, scattered about the kingdom, and occasionally murdered, the direwolves are often their only ride or dies in the world. So Jon and Ghost are deeply connected in that sense. Bran can even warg (or spiritually inhabit) in and out of his direwolf Summer, which some fans speculate all the Starks can do, whether or not they've tapped into it yet. In the books, Jon has some tentative warging experiences with Ghost, but he mostly conceptualizes them as dreams, rather than accepting that he's actually a warg.

Interestingly, in the books, Jon Snow's last word before he succumbs to his stab wounds is "Ghost," which many fans believe to mean that he had the idea to warg at the last minute, just before his body gave out. This could mean that his spirit found temporary shelter inside Ghost, until Melisandre got his body up and running again, at which point, he zapped back to his own body. The startling way Jon Snow snaps awake certainly resembles the way Bran jolts back into his body after warging.

As Vanity Fair pointed out, Kit Harrington teased audiences on this very subject at a panel event last year:

"He told the audience, 'I’d like to be a warg. I’d like to put myself inside a wolf.' (As you might imagine this got a lot of laughs.) Show creator Dan Weiss then said, 'Two words for you: Season 6.' It all seems like a joke, but maybe not. In the books Melisandre describes Jon as 'a man then a wolf than a man' which sounds pretty close to the waging experience."

Basically, the books highlight Jon Snow's connection with Ghost much more than the series does, but it looks like Dan Weiss and David Benioff are hip to their bond and will use the text to support their Snow-related forays into Season 6.