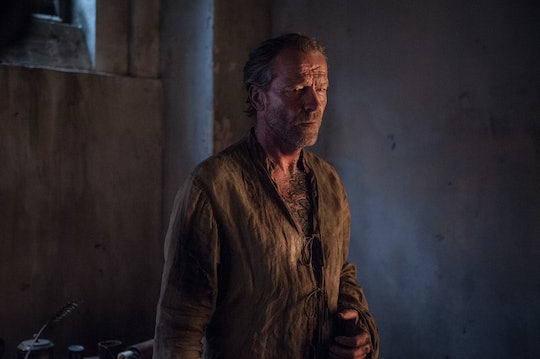 Jorah Has A New Mission On 'Game Of Thrones'

Ser Jorah Mormont hasn't been having a great time in the past few seasons, but it looks like his story has finally gained some momentum after Episode 3. But is Jorah heading to Dragonstone on Game of Thrones? Now that his greyscale has been cured (thanks to Sam!), he is free to rejoin his queen. The only problem is, of course, whether he actually knows where she is.

When Jorah and Dany last saw each other, Jorah assumed it was the last time he'd ever see her, as he'd just contracted the disease. In the world of Game of Thrones, greyscale is a highly infectious skin disease spread through physical contact. Once you've been infected, hard scales develop all over your skin until it drives you mad and kills you. There is said to be no cure for greyscale and it is tantamount to a death sentence once you get it. Daenerys commanded Jorah to find a cure for greyscale and return to her service. Because Jorah loves Dany, he went to the Citadel to try, all the while honestly believing he was a goner. Luckily Sam Tarly, who is way more of a rebel than he lets on, did some illicit research, and found the cure.

The cure, it turns out, is remarkably simple (though absolutely disgusting). Sam just cut all the scales off and applied some medicinal ointment to the infected skin below. While this was highly unpleasant to watch and presumably quite painful for Jorah, it worked. Jorah is now cured of greyscale and Sam gets to go back to his menial everyday tasks of copying documents and washing out bedpans. The good news is that Jorah is now at liberty to return to Queen Daenerys as he was commanded to do. The only question is if he knows where he's going.

Jon is, of course, already at Dragonstone and clearly received Sam's raven telling him about the mountain of dragonglass beneath it. But has Jon been communicating back with Sam? Does Sam now know where Jon is? The last time Jorah checked with Sam about the dragon queen's whereabouts, by very rudely reaching out to try and grab him, Sam hadn't heard anything. However, the way the pacing of the show appears to be going this season, I would be very surprised if Jorah doesn't figure out where Daenerys is very soon. There was a shot of him writing a letter to her, so perhaps he does have her address. If I had to bet, I'd say Jorah is going to show up at Dragonstone any day now for one more emotional reunion.