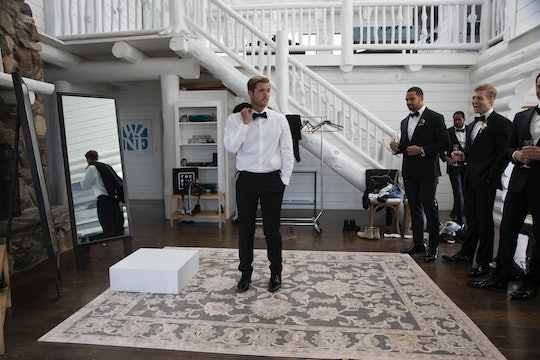 Is Jordan Still Modeling After 'The Bachelorette'?

If Bachelor Nation doesn’t know by now that Bachelorette contestant Jordan Kimball is a model, they clearly haven’t seen one episode this season. The question is, though, is if Jordan is still modeling after The Bachelorette. In his ABC biography, Jordan says he's "a former Business/Accounting major" who "turned his good looks into a professional modeling career." It goes on to say, "When he's not posing for magazines shoots giving his best 'pensive gentleman' look, Jordan enjoys kayaking and running. With a personal best mile time of 4.24 Jordan's excited to sprint to the finish line with the Bachelorette." He is from Crystal River, Florida, which doesn’t seem like a modeling metropolis, but what do I know? Jordan has a Wilhelmina profile, so he does seem to be legit.

Jordan hasn't made a lot of friends on the show, and in fact seems to be at the center of all the show's conflict. Given that he's set to appear on the dreaded 2-on-1 date with his arch-nemesis David, it would appear that his time on the show is coming to an end and he'll need that day job again. So is Jordan still modeling? According to his Instagram, it appears so. He’s wearing sunglasses, smizing, and of course: giving us the famous “pensive gentleman” look. Plus, his Wilhelmina profile still exists, so I can only assume he’s still signed with them.

On the show, Jordan is known as much for his feuds with the other men as for his modeling. Since night-one he was confrontational, but as the season has progressed he’s only upped the ante. On one episode, Jordan decided to take his look to a new level and strip down to his underwear for a cocktail party. “I'm ready to blow the group away. I'm going to do more with less," Jordan reasoned (just kidding, there was no reasoning behind this). "To be honest,” he continued, “nothing attracts a woman more than being comfortable next to a sexy man. After this, there is going to be a target on my back.”

No one — not Becca, not the other contestants, not the fans — liked this move. But Jordan's confidence in his own physical attractiveness seems to be pretty absolute. For example, in another instance Jordan bragged that he had over 4,000 Tinder matches and a 100 percent match rate — which he knew because of a notification from Tinder itself. David, apparently thinking what all of Twitter was thinking, called BS. He was so irritated that he went to Becca about it.

Becca mostly laughed off Jordan's braggadocio. In “honor” of his penchant for walking around in his underwear, Becca gifted Jordan a pair of golden underwear. Jordan showing off his new golden briefs set off yet another one of Becca's suitors, Colton. During a confessional, the front-runner said,

The dude's a clown and for the record, I don't think Jordan's here for the right reasons ... Running around in golden underwear, Jordan's focused more on himself. It's disrespectful to all of us and it's disrespectful to Becca. I want Jordan to know exactly where I stand with him. I'm tired of being in this situation with clowns.

Whatever Jordan's reasons were for joining the show and trying to start a relationship with Becca, smart money would bet that he's not going to be around for much longer. And in that case, at least it looks like he still has his modeling career to fall back on. And if Bachelor Nation is really lucky — he'll show up again on Bachelor in Paradise. I, for one, have my fingers crossed.