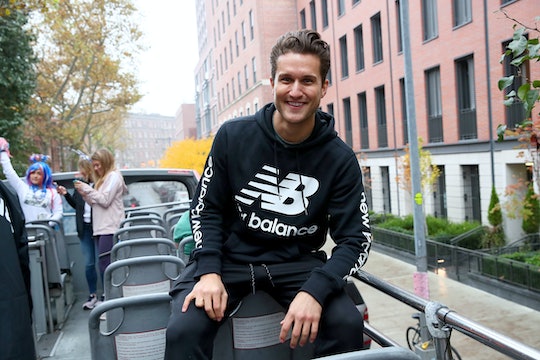 In Season 2, Bravo's Summer House welcomed a new renter, Jordan Verroi, who joined his coworkers and fellow newcomers Paige DeSorbo and Hannah Berner in the Hamptons summer house. He quickly made a name for himself as something of a player, first making out with housemate Danielle Olivera, then claiming he was actually interested in Paige, then telling a series of hard-to-believe stories about his romantic exploits. All this may have Summer House fans wondering: is Jordan Verroi single now? What we do know is that he and Paige never became an item. She started dating Carl, another housemate, but in an April interview with Entertainment Tonight, she revealed that she's still very single.

Since Jordan bills himself as a ~man of mystery~, it probably won't surprise you to know that it's difficult to tell if he's seeing anyone based on his social media accounts. Unlike people who prefer to keep their romantic lives out of the spotlight by never posting potentially couple-y photos, Jordan has so many women in his Instagram feed, he could literally be dating any of them. (Even Melissa Gorga? Wouldn't put it past this guy, TBH!) Look, Jordan is clearly a man who knows how to network — it's his life's passion and he's built a successful business off of his social media savvy.

It's hard to gauge whether any one of the myriad women on his feed is someone special, someone he wants fans to think is special, or just a colleague it benefits him to be seen with. As for whether he really broke Hinge, made out with three girls in one night, or lost his virginity in the, uh, graphic way he described on the show — his housemates have some questions.

In an interview with Hollywood Life, fellow housemate Lindsay Hubbard said she thought Jordan was "kind of making up that he made out with "three other girls" while trying to woo Danielle and she was not here for it. "If somebody is messing around with my friend, that mama bear is gonna come out of me," she said. "I’m very protective."

The sleaze factor with Jordan seems high, and he even attempted to neg Danielle by calling her a "rental car." But his coworker and friend Hannah — whom he's known since before Summer House — came to his defense, insisting that the 30-year-old model is simply navigating some culture shock.

Said Hannah in an interview with Bravo's The Daily Dish podcast:

I just think he's working on who he is as a person. I'm from New York City so I don't know what it's like growing up in the South with a military family, super religious, and then living in New York City, so I feel like he's dealing with a lot of identity questions and not going about it the best way. But I have hope for him.

Maybe Jordan just has a little growing up to do. But one thing's for sure: no one is falling for the "man of mystery" shtick when it's just code for "compulsive liar."

Editor's note: An earlier version of this article incorrectly stated Jordan's age. It has been corrected.