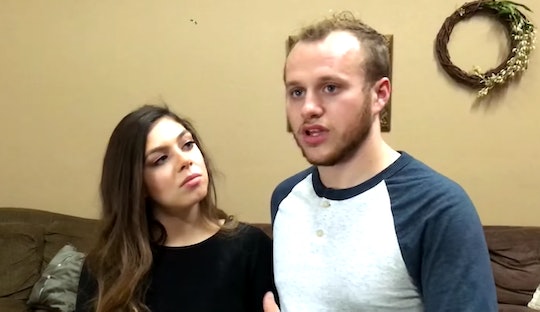 Josiah Duggar's Instagram Points To His Political Beliefs & Here's Why

Josiah Duggar is probably used to people wanting to know all about his life. After all, the 21-year-old grew up with more than a dozen brothers and sisters, all while on TV. And now that Duggar is on TLC's reality show, Counting On, with his siblings and recently got engaged to 18-year-old Lauren Swanson, it's only natural that people may be interested in learning more about the Duggar son's personal life, such as his political beliefs and wondering whether Josiah Duggar is a Republican like his parents.

If you're familiar with the Duggar family, then you already know that they are pretty conservative when it comes to just about everything. The Duggars are known Independent Baptists and they are pretty proud of it. They have rules on what their kids can wear before marriage and how their kids can date. They're even conservative about when and how much their children can be on social media as well as what kind of schooling their children are able to attend.

With such staunch rules and morals in their household, it shouldn't come as a surprise that their religion could affect the views of their children, including Duggar. While Duggar hasn't flat out declared that he is a Republican, one post on his Instagram points to a possible political leaning.

In the photo, posted to Duggar's Instagram account in October 2017, he holds a poster with the phrase "abortion kills children" on it. "Standing with thousands of pro-life individuals throughout the country in the #lifechain," Duggar wrote in the photo's caption. The Republican party is very much associated with the pro-life movement; the party stands for the rights of the unborn and believes that fetuses should be protected. Because of this, it seems safe to assume that Duggar's beliefs fall in line with the Republican party's.

But if this isn't enough, you can look to other members of Duggar's family who could have an influence over his political leanings. Duggar's dad, Jim-Bob Duggar is a known Republican who entered in the Republican Primary in Arkansas in 2002 with dreams of being a senator, according to The New York Times. His mom, Michelle, and Jim-Bob are also proud supporters of and family friends with Republican and former Arkansas Governor, Mike Huckabee, according to CNN. Duggar himself extended this support in May 2015 when he posted a photo with the caption, "Excited to stand with @govmikehuckabee for President!"

Additionally, shortly before Donald Trump got inaugurated to become the President of the United States, the Duggar family voiced pro-Trump opinions on Facebook, according to Inquistr. "Evangelicals played a huge role in Donald Trump becoming our president next week," Jim Bob and Michelle wrote on Facebook in January 2017. "We all know that we need to see our country turn back to god."

While Duggar's parents don't necessarily speak for him and his political beliefs, studies have found that parents play a major role in determining the political stance of their kids. Outside factors also contribute to a person's political views — the political leanings of their town and spouse can also help form the way they vote, according to The Cut. Given that Duggar's fiancée, Swanson, comes from a conservative family that is similar to the Duggars, according to the Hollywood Gossip, it's also likely that she has perhaps contributed to his conservative views as well.

There could always be a lingering possibility that Duggar and any of his other 18 brothers and sisters also hold Democratic views. But due to the environment Duggar has grown up in and his proclamation about abortion and support for a political candidate on Instagram, it seems to be clear that Duggar has some strong conservative leanings that could match up with the Republican party.