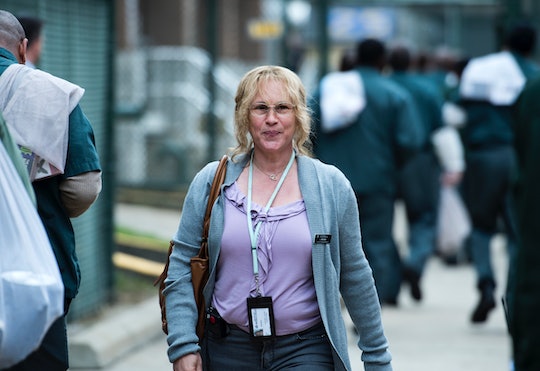 Here's Where Joyce 'Tilly' Mitchell Is After The 'Escape At Dannemora'

Joyce "Tilly" Mitchell became infamous after assisting with an elaborate upstate New York prison break in 2015 which involved, among other feats, smuggling two hacksaw blades into the prison frozen inside packages of hamburger meat. Showtime's seven-part miniseries about the event, Escape at Dannemora tells the story leading up to her eventual conviction, but viewers may be wondering: is Joyce "Tilly" Mitchell still in prison? The former civilian inmate supervisor was recently denied parole.

In September of 2015, Mitchell received a prison sentence of up to seven years, according to CNN, to be served at Bedford Hills Correctional Facility. In February of 2017, she was denied parole on the grounds that her "release would be incompatible with the welfare of society." Later that year, in September, Mitchell was denied parole a second time. According to a local NBC News affiliate, she won't be eligible for parole again until June 2019.

Mitchell was convicted in 2015 on a first-degree charge of promoting prison contraband for smuggling in the hacksaws, along with a fourth-degree misdemeanor charge for criminal facilitation. During her sentencing, Judge Kevin Ryan came down hard on Mitchell for the millions of dollars the prison break cost the state of New York. After Richard Matt and David Sweat, two inmates with whom Mitchell was having sexual relationships, escaped from the prison through its piping and ventilation system, they remained on the lam for three weeks, sparking an expensive manhunt. Judge Ryan estimated $23 million in overtime costs to the state alone.

He also noted the emotional toll the manhunt took on the residents of Dannemora, New York and its neighboring counties. Said Judge Ryan, according to CNN:

A large portion of the local population were terrorized. Many were forced to flee their homes. Some did not not have places to go, and had to rent hotel rooms or leave the area. Many residents did not sleep for many nights, afraid that these two extremely violent individuals might be outside their homes.

During the sentencing hearing, Mitchell claimed she got caught up in the fantasy and attention she was receiving from the two men, and also that she was in fear for her family if she didn't help them with the escape. At one point, Matt and Sweat plotted to murder Mitchell's husband Lyle so the trio could run away together, but that element of the plan never materialized. Mitchell was supposed to drive the getaway car on the night that Matt and Sweat finally slipped out through the holes they managed to cut into their prison cells and the adjacent piping system. But she changed her mind at the last minute and the men were eventually apprehended.