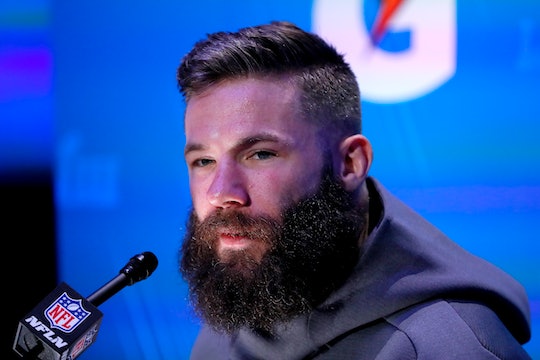 Patriots Star Julian Edelman Isn't Married, But He Has A Special Lady In His Life

I don’t know about you, but whenever I watch stars — whether they're movie, TV, or sports stars — performing at their best, I inevitably start to wonder about their personal lives. What do they have to work around, or even put on hold, in order to train and excel at the level that they do? For the New England Patriots, there is one star whose personal life is public knowledge, Tom Brady. But what about some of Brady’s supporting cast, like the wide receiver that’s on the other end of those rocket passes? So is Julian Edelman married, and, if so, to whom?

It seems like major sports figures are always hopping around in high-profile relationships, but Edelman has been a bit of an outlier in that regard. He’s not currently dating anyone, according to Heavy, and hasn’t in some time. Instead he’s been focused on another girl in his life: his 2-year-old daughter Lily, according to Heavy.

Edelman was in a casual dating relationship with Swedish model Ella Rose, as TMZ reported, and near the end of their nearly two-year relationship, she got pregnant. Edelman didn’t believe it at first and wouldn’t claim the baby until Rose hit in him with a paternity suit, according to the Daily Mail. At that point, he acknowledged his role in the pregnancy and got involved.

The Boston Globe reported that Rose planned to have the baby in Massachusetts where Edelman lives, but as it turned out, the NFL star made the trip out to California instead and was able to be there for the birth.

About the same time the pregnancy was announced, Edelman was linked with Brazilian supermodel Adriana Lima, as the Daily Mail reported. The two were reportedly seen together holding hands in Nantucket, according to HuffPost, which was the start of a months-long relationship. At the time, TMZ reported that "they met at the beginning of the month in Miami through mutual friends and have been out a couple of times," but that they were not "exclusive."

Lima was seen at the 2017 AFC Championship game, where she was overheard calling Edelman “my lover.” It was sweet, but things apparently weren’t destined to last.

Edelman ended the romance soon after that sighting, as Heavy reported, and it was thought over the issue of children. According to TMZ, a source reportedly told the outlet that "both stars are on completely different pages when it comes to family planning," specifically that Lima would like more children and Edelman reportedly does not for the time being. Lima has two children with her ex-husband, former NBA player Marko Jaric, according to E! News.

Since then, Edelman has been devoting his time to his daughter, and often posts about her on social media. For instance, he included her in his 2018 year-end post, looking at home in her dad’s office on the football field.

Will 2019 bring new love for the Patriots star? NFL fans will just have to wait in see. In the meantime, you can catch him at his best during the Super Bowl on Sunday, Feb. 3.