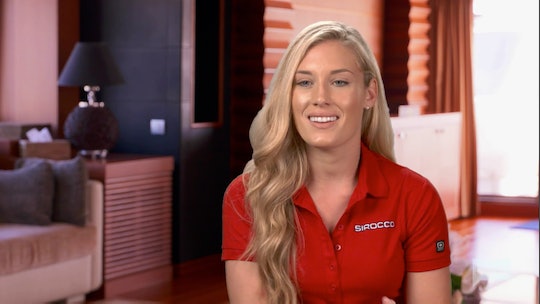 After Captain Sandy Yawn fired Chef Mila Kolomeitseva, June Foster was introduced as the ship’s third stew on Below Deck Mediterranean. As with any newbie, I’m sure it’ll take time for June to get comfortable and open up to the rest of the crew. In the meantime, fans want to know everything about her, and because there’s always a chance of an on-board romance, many are wondering if June Foster is single on Below Deck Mediterannean.

June hasn’t revealed much about her personal life on the show, but in a preview for the new episode, she does admit that she's seeing someone. However, on her Instagram page, June mostly posts pictures by herself or with family and friends, so there's no way to tell who she's dating. That’s a sign that she might be trying to keep her romantic life out of the public eye.

When June was introduced on last week’s episode, she did reveal a few other details about herself. She mentioned that she worked as a bartender and a server in the past, and decided to combine her love of travel to her career. “I put two of my favorite worlds together and got into yachting," she says on the show.

Through her Instagram page, you can see that June has racked up quite an impressive resume. In addition to being a stewie, bartender, and server, June is a yoga instructor and an author. Earlier this year, she released a novel titled The Girl and the Golden Leaf, which is about 16-year-old twins, Finn and Tia, who are trying to escape poverty after the death of their parents. After a Hollywood executive offers them a role in one of his movies, Tia believes it to be the golden ticket she was praying for.

“From Chile's exotic Río Futaleufú, to her captivity in the Amazon Rainforest and the slums of Buenos Aires, Tia's deep faith touches everyone she meets,” the Amazon description of the book reads. “But will her faith be enough to survive the darkest pits of humanity?”

The premise sounds pretty intense, but on her personal website, June reveals that she’s dedicated to raising awareness about humanitarian causes through her book, which goes to explain why she wrote a story like this. “June’s true passion; however, is child advocacy and conservation,” the website reads. “She supports a wide-variety of conservation and children’s non-profit organizations through writing, volunteering, and fundraising initiatives — The Girl and the Golden Leaf is the first book in a series dedicated to humanitarian efforts and the preservation of the world’s natural resources for future generations.”

From the looks of it, being a stew on Below Deck Mediterranean is only one small part of June’s life. And with all the writing, advocacy, and travel she’s been busy with, I wouldn’t be surprised if she hasn’t found time for a serious IG-worthy relationship. I guess fans will have to keep an eye on June’s social media pages and continue watching through the season to find out more about her love life.

New episodes of Below Deck Mediterranean air Mondays at 9 p.m. ET on Bravo.