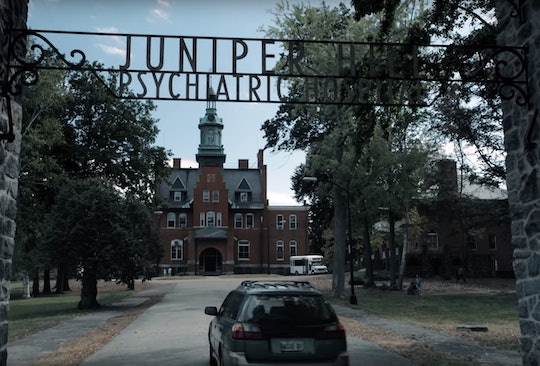 Hulu’s new series Castle Rock was inspired by the world of Stephen King, and is set in his fictional town of Castle Rock, Maine. The creepy town has served as the landscape for many King novels, leading many to wonder if it's a real place. The fifth episode of the series mentions another place that will be familiar to King fans, the Juniper Hill Asylum. But is Juniper Hill a real place? It comes straight out of King’s books.

Juniper Hill is a fictional psychiatric facility that is featured in many King novels, including It, Needful Things, and The Dark Half. The asylum has been home to a number of King’s villains — after all what's spookier than mismanaged asylum? But the facility is completely fictional. There are actually a couple of real places in Maine that are named “Juniper Hill,” including a middle school and boutique hotel, they have no connection to the asylum described in King’s novels or Castle Rock.

However, the location used to film Juniper Hill Asylum in Castle Rock was once really used as a psychiatric facility. The structure is part of Tewksbury Hospital in Tewksbury, Massachusetts, which is now home to the Public Health Museum. According to the museum’s website, the historic building featured in the show is the Old Administration Building of Tewksbury Hospital, and was built in 1894. The hospital was a state run almshouse which provided healthcare for immigrants and the poor, an eventually went on to care for patients with mental illnesses.

“In 1866, the almshouse began accepting the 'pauper insane,' becoming the state’s first facility to specifically accept cases with the diagnosis of chronic insanity,” the museum’s website stated. “The chronically ill population continued to grow, alcoholics were admitted for treatment, and programs providing therapeutic industrial and occupational therapy were added in the 1870s.” The hospital now serves as a treatment center for people suffering from medical and mental illnesses, and its older buildings have been restored and preserved as historic sites.

What role Juniper Hill will play in Castle Rock is yet to be seen. Of course, there’s always a chance that one of the series’ characters ends up there. Henry Deaver, talks of sending the mysterious and likely dangerous "Kid" played by Bill Skarsgård, to Juniper Hill since no one knows who he is or where he came from.

While Castle Rock was not written by King, there are a lot of throwbacks to his novels in the series. The fictional Shawshank Prison — which was featured in Rita Hayworth and The Shawshank Redemption — plays a huge role in Castle Rock and is a source of much of the town’s chaos. The series also mentions some of the Castle Rock’s fictional history with shout-outs to King’s novels, including multiple references to the rabid dog Cujo and the town’s serial killer, Frank Dodd from The Dead Zone. With all the Easter eggs thrown into the show, I wouldn’t be surprised to hear reference’s to Juniper Hill’s patients, including It’s bully Henry Bowers and Needful Thing’s Nettie Cobbs.

It will be interesting to see how Juniper Hill’s fictional history is weaved into Castle Rock and what part, if any, its infamous patients will play in the action to come. With so much suspense building in the show, I can’t wait to see what happens next.

New episodes of Castle Rock premiere every Wednesday on Hulu.