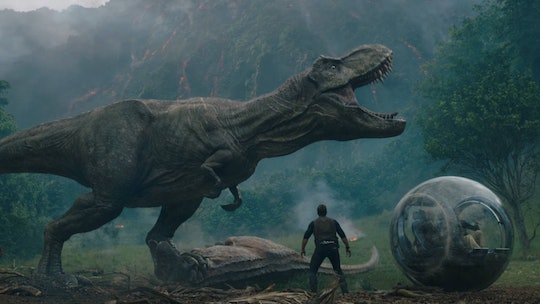 No, Kids Under 5 Should NOT See 'Jurassic World: Fallen Kingdom'

The Jurassic Park franchise has been a magical experience for children for decades now, mostly due to the fact it brings dinosaurs to life in a way no one and nothing else has before. With the latest installment due in theaters June 22, parents might be wondering: is Jurassic World: Fallen Kingdom appropriate for kids under five? Well, the film is rated PG-13 so you would think that the answer be that it is absolutely not appropriate for children under the age of five. However, the decision is ultimately yours as the parent of your child.

If the rating alone isn't enough to convince you that your dinosaur-loving child shouldn't see Jurassic World: Fallen Kingdom, Romper is happy to provide additional information for you. Thanks to our friends at Universal Pictures, I was able to see the film in it's entirety in an advanced screening. While Jurassic World: Fallen Kingdom is just as great of a moviegoing experience as previous Jurassic Park films, it is much, much darker than all of them combined. In fact, even Steven Spielberg, an executive producer on the film, has told Entertainment Weekly, "What becomes scary about it is it becomes more contained, like we have an Indoraptor in a little girl’s bedroom. That’s a kind of hell that we haven’t seen in a Jurassic movie. It’s surreal to see dinosaurs in that kind of an environment. And let me just tell you, there’s so much carnage!"

No one knows your child better than you do, but the amount of "carnage" that EP Spielberg is referring to will likely be far too much for any child under the age of five. Without spoiling the film for parents who are looking forward to seeing the film regardless, there is a lot of death -- specifically dinosaur death. The reason why children love these movies is because dinosaurs are fascinating to them. They are majestic, almost mythical creatures because they've never seen them -- and never will see them -- alive and in the flesh. They are toys, storybooks, and cartoons brought to life on the big screen before them. Because of that, watching dinosaurs endure and succumb to the darkness featured in Jurassic World: Fallen Kingdom could be very upsetting for young children.

Plus, there is the moment Spielberg refers to, when a carnivore dinosaur sets his sights (and mighty large tastebuds) on a little girl. Things become borderline horrifying when the dinosaur in question is just inches away from devouring the girl, even as she hides under the safety net of bed covers. For parents, it could be hard to convince small children that dinosaurs won't be coming in through their bedroom windows and trying to eat them -- something that could make for a lot of sleepless nights. Something tells me that a dinosaur trying to eat your child will top any monster hiding under the bed or inside the closet when it's time to go to sleep.

If everything stated here has left you on the fence about whether or not your child under the age of five should see Jurassic World: Fallen Kingdom, the last bit of advice I can suggest is that you see the film for yourself first. The decision is ultimately yours, and if you feel strongly that your young child might be able to understand what they are watching, you should always watch it first. As previously stated, no one knows your child better than you do.

So, if you want to go based off of rating alone, PG-13 means definitely not for children under the age of five. The violence, death, and scares will certainly be far too much for any young child to handle.