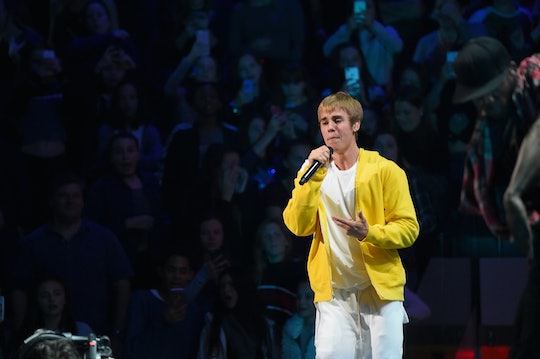 Despite being nominated in three categories for his work on the remix of "Despacito" — Song of the Year, Record of the Year, and Best Pop Duo/Group Performance of the Year — Justin Bieber won't be attending the Grammy Awards to perform the hit song alongside Luis Fonsi and Daddy Yankee. So is Justin Bieber at the 2018 Grammys? It looks like he's hyper-focused on his new album, and not accepting any distractions at this time.

According to TMZ, Bieber reportedly won't be attending any award shows until he's completed work on a new album he's making. Bieber also didn't show his face at the Grammys last year, in spite of being up for Album of the Year. In last year's case, it was something of an unofficial boycott, along with stars like Drake, Kanye West, and Frank Ocean, over the soul-crushing whiteness of The Recording Academy. Sources told TMZ at the time that Bieber "just doesn’t think the Grammys are relevant or representative, especially when it comes to young singers." He came under fire for the choice at the time, because while black artists have a legitimate grievance against The Recording Academy marginalizing them, Bieber is a white pop star whose complaint was being snubbed over... his youth? It was a strange piggyback onto an actually meaningful boycott. But in any case, it seemed to work, with more hip-hop artists being represented in the top four categories this year than ever before — and many of them favored to win.

Bieber is a 10-time Grammy nominee, although he's only won once for Best Dance Recording for his song "Where R Ü Now?" with Jack Ü. Aside from celebrating his work on "Despacito," all eyes were expected to be on Bieber at the Grammys this year thanks to a long-awaited reunion with ex-girlfriend Selena Gomez, who is now his current girlfriend once more. According to People, the pair met in 2010 (on a friend date at IHOP no less) before going public with their relationship at the Vanity Fair Oscars Party in February 2011. They broke up in November of 2012 and each suffered a fair bit of tumult in their personal lives in the years that followed. Bieber and Gomez both dated other people and briefly got back together in 2014, but they also both put out boundary-pushing albums in their own right during their time apart.

They got back together a couple of months before the Grammys, and, according to an E! News source, "Everything is so different this time around."

"Justin is behaving like a gentlemen and showing how much he cares about her," the source added. "He's a lot more open about his feelings towards Selena, which has been a big sign of him maturing."

The "Despacito" performance was a huge success at the Grammys in spite of Bieber's absence. "As the loving son of a Puerto Rican mother," former New York Giant Victor Cruz introduced Luis Fonsi and Daddy Yankee, pointing out that their track is "the biggest Latin smash in history, and one of the biggest global hits of all time." He also noted that "the song has broken all records with nearly 5 billion views on YouTube." The gang behind "Despacito" lost out on Best Pop Duo/Group Performance to Portugal. The Man for "Feel It Still." Song of the Year went to Bruno Mars' "That's What I Like," and he also won Record of the Year for "24K Magic." Whatever Bieber is diligently working on, we'll have to wait till next year to see him make another Grammys appearance.