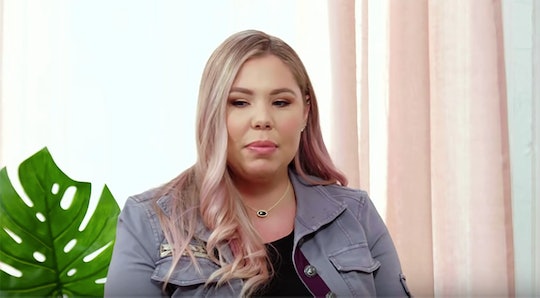 Teen Mom 2 star Kailyn Lowry has had her fair share of heartbreaks over the years, including her divorce from Javi Marroquin and her on-and-off again romance with Chris Lopez. As for whether Kailyn is dating anyone now? The mom can't seem to settle on what she wants.

Arguably the most confusing part about Kailyn's love life is her relationship with Chris, the father of her third child, Lux. It's hard to decipher whether the two were actually together when the baby was conceived, or if they were ever an official thing at all. The whole situation was especially complicated because she and Javi went on the reality TV show Marriage Boot Camp shortly before she got pregnant with Lux.

Timeline aside, Kailyn has never gotten over Chris. The have yet to put any labels on the situation, but the mom is always hinting that they're in it for the long haul.

“I don’t go out on dates or date new people ever,” Kailyn admitted on her podcast, Coffee Convos, in January, adding, "We’re getting married next month. I’m just kidding!”

But before you start shipping these two, first take a look at Kailyn's tweets from Jan. 30. It all started after the reality star tweeted a cryptic quote about love, which prompted a fan to ask whether baby daddy number four "is on the horizon." Kailyn replied: “I guess. If my 4th baby dad is a girl.”

It's important to note here that Kailyn has dated women before and she considers herself to be bisexual. Her last same-sex relationship was with Dominique Potter in November 2017, about three months after she welcomed Lux into the world.

Now here's where things get really confusing — after implying she's considering another relationship with a woman, Kailyn appeared on the MTV dating show, Game of Clones, in February.

"MTV stars will date seven clones of their celebrity crush — who may look the same but are totally different people — and when they look beyond those pretty (identical) faces, each dater will discover which of these famous doppelgangers melts their heart and which just makes their skin crawl," the show's description reads.

As for Kailyn's celeb crush? Migos rapper Quavo. "He doesn't give a f*ck, he's got the right amount of swag, but he's chill," Kailyn said about her dream guy, according to MTV.

Despite going on this dating show, Kailyn said she has no time to date.

"I don't date as a mother of three — I don't have time to date," she said during the show. "I'm hoping that I learn how to date, just because I don't know how."

Kailyn's experience on Game of Thrones must not have gone that well because she regrets the experience now. When a fan asked Kailyn why she went on the show, she replied:

"I wasn’t thinking. Met cool people but also embarrassed and wished I didn’t. Plus, I wouldn’t be with another man.

Of course, Kailyn has plenty of time to figure her love life out. The mom-of-three is only 26, after all, and there's no rush for her to find a new relationship.