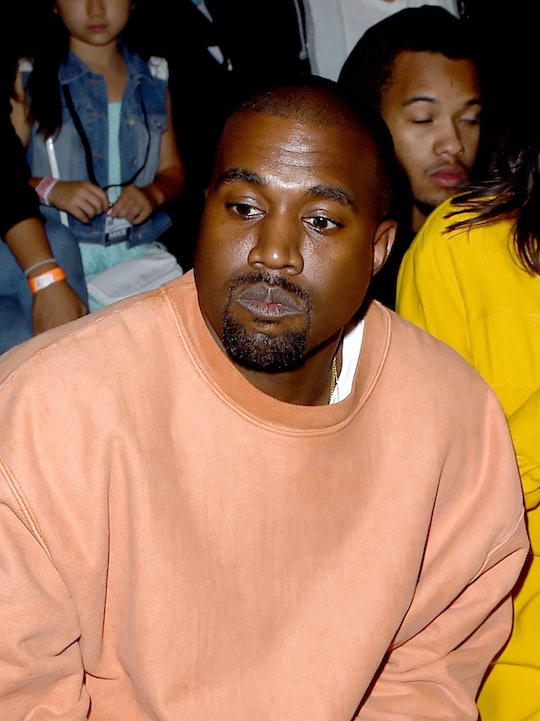 Is Kanye At The VMAs? Kanye & Kim Have Arrived

It's not really the VMAs without Kanye West, is it? Some of the most memorable VMA moments come courtesy of West's particular brand of egocentric attention-getting antics, and this year seems especially primed for them. The release of his "Famous" video and the subsequent drama with Taylor Swift have brought back memories of VMAs past, when West jumped on stage to steal Swift's award-winning thunder. It seems definite that West is going to do something nutty this year, so anyone tuning in is likely to be waiting with baited breath to catch whatever he does. But is Kanye West at the VMAs?

Of course he is! The real question is, now that he's here, what is he going to do? West has been given four minutes during the show to do whatever he wants on stage, which could lead to some spectacular results – or a train wreck of massive proportions. He's set to perform during the show, too, but it's unclear whether his four minutes of total freedom will be the four minutes of his performance or not. According to TMZ, West can "can rap, sing, dance or even just stay silent" during his time onstage and no one, not even the show's producers, know what he's going to do. Good or bad, his time on stage will probably be something everyone's talking about for months afterwards.

West and his wife Kim Kardashian arrived on the red carpet in complementary outfits, West all in white and Kardashian all in black. Their artfully casual look — a T-shirt for him and wet hair for her — is the kind of thing only they can pull off; I mean seriously, a look that undone shouldn't look as cool as it does. And the only thing emblazoned on West's white shirt? The title of his controversial song, "Famous."

Even though West was confirmed for the awards, he's so unpredictable that it was a question whether or not he would actually be there. He's keeping his plans for those unknown four minutes so secret that he didn't even show up for the show's dress rehearsal. If there's one thing West knows, it's how to build anticipation.

There's no way of know just what West has planned, but of course that's the whole point. He's going to shock people whether he delivers a stage spectacular or a low key performance, so the only thing anyone can do is wait and see.