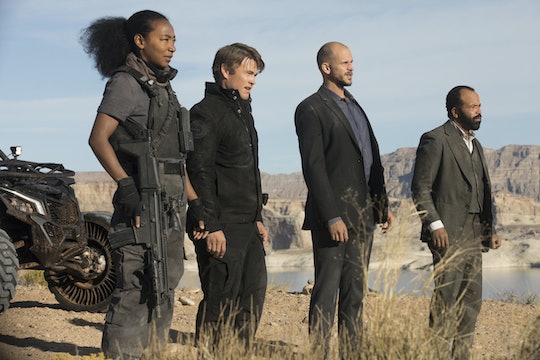 In the Season 2 premiere of Westworld, viewers were introduced to some new characters connected with Delos, the company that controls the parks. One such character was the short-tempered Karl Strand, played by Gustaf Skarsgård, who seems particularly suspicious of Bernard. Is it possible he knows that Bernard is secretly a host? No one know ever seems to figure that out except other hosts, which might have some fans asking: is Karl Strand a host on Westworld?

Since Karl is so new to the show (and only one episode has aired so far), audiences are eager to theorize about him. Nothing is ever what is seems on Westworld and people from corporate are especially untrustworthy because they seem to have hidden agendas motivating all of their actions. But just because Karl seems shady and skeptical doesn't mean he's a host — especially since there's not much evidence to back that theory up.

In Skarsgård's casting announcement, The Hollywood Reporter described Karl as "a white-collar guy comfortable in the field" and that proved to be true in Episode 1. He was brutally unforgiving with the captured hosts, ordering their execution even if they weren't actively hurting anyone. He viewed them as enemies, which would make it pretty strange if he turned out to be one himself. Then again, perhaps posing as a host-hater is the ultimate cover for a host in disguise. If so, Bernard ought to give it a try.

Whatever Karl might be hiding would be as much of a surprise to Skarsgård as it would to the audience. Prior to the premiere, he told Interview that he was "kept on a need-to-know basis," only sharing that Karl was a "man with a military background, who you call in to solve sh*t, get sh*t done." That doesn't make it sound like he's a host himself, but it wouldn't be a very good twist if it were very obvious.

The drone hosts proved that Delos isn't above using hosts for their own purposes, and giving Karl his own background would make it more convincing. Bernard had memories of his dying son and phone calls with his ex-wife, so it's not like hosts come without history. Perhaps Karl was programmed to be a former officer who takes care of what Delos needs taken care of.

But the show has revealed so little about Karl that basically any theory is plausible because there's no information to directly contradict it with. Karl's questionable treatment of Bernard is hardly evidence, especially because the HBO site describes Karl as having "no empathy for the hosts." That's a quality most of the humans seem to share (with some notable exceptions; looking at you, Felix!), which puts Karl firmly on Team Human.

Karl is the Head of Operations at Delos, and he has strong opinions about how things should be run. That also makes him sound a lot like the other humans who have been introduced over the course of the show's run. Many of them are arrogant and set in their ways, confident in their sense of control and in their superiority over the hosts. Karl doesn't seem like another host so much as one more obstacle that must be overcome. Perhaps he can even provide the push Bernard needs to abandon his human connections and fully join Dolores' robot rebellion.

Plus, it's a little difficult to believe that Westworld would dip back into the same well to deliver the exact same twist they already executed with Bernard. There are always layers to what's going on in this show, but perhaps this is one instance where it's okay to take a character at face value.