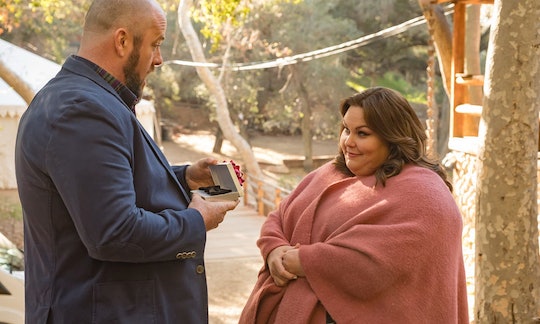 The flash-forward situations on This Is Us have fans everywhere playing detective. The mysterious "her" first mentioned at the end of Season 2 and then again on last week's premiere, sent the internet on fire. An older Randall and adult Tess were supposed to go see "her," alluding that Beth may be the "her" in question — until Randall called Toby. So is Kate "her" on This Is Us or is that what writers want viewers to believe?

According to Glamour, creator Dan Fogelman said during a SXSW panel "if you watch old family videos 10 to 15 years apart from each other, you’re always going to be surprised when you pop in the tape, and see who’s still there, who’s not there, who might have passed away, who split up, what happened. So there’s a lot of possibilities of what Randall and Tess are talking about." The beauty of what This Is Us creators have produced is that there can be theories, but they're not usually what happens. Fogelman added the wait for finding out who "her" is will be worth it. "It will pay off — like the way Jack’s death paid off — where everything made sense, everything was laden, and nothing was falsely labeled." This sounds like a complicated way of saying "you have to wait a little longer for answers."

The cast and crew have always remained tight-lipped when it comes to plot points but in an interview with Entertainment Weekly, Chrissy Metz (who plays Kate Pearson) gave one small hint on who "her" might be. “It’s not going to be what you expect, but it will be difficult to digest, for sure.” In the same EW interview, Toby himself (Chris Sullivan) weighed in. “We shot in a couple of different configurations and a couple different lines, hinting at different things." He concluded by saying he does know who "her" is but of course, he can't spill. Um, OK?

If I were to put on my detective hat (which I don't really have, BTW), I'd replay what Randall said to Toby in that flash-forward last Tuesday. He said "she wants you to be there, Toby." Seeing as Toby wasn't wearing a wedding ring, and sat with a scruffy-looking beard alone in bed, I still can't put my money on Kate because that's too obvious. I'm not falling for it, Fogelman. Other key players are Beth, Rebecca, and Deja, but the suspense is killing my insides.

The internet has some theories and while some of them seem OK, others are just wildly entertaining to read. Like, internet spies really commit to ideas and before you know it, you've spiraled down a hundred rabbit holes that go in circles. Super fun.

With the next episode promising to have good news — and another look at Randall's biological father, William (Ron Cephas Jones), there may not be much more to read into with "her" right away. Or, at the tail end of the show, that's when it'll happen. For now, this is where everyone should re-direct because TIU won't give the obvious answers. Even they're playing coy — and I'm into it.

According to Deadline, Fogelman said the answers about "her" will come throughout the season. "You’re going to get it in little doses and you’re going to get your answers," he said. "We’re not going to string it out over seven seasons. People will get their answer."

The verdict? Maybe it's Kate. Maybe it's not Kate. Maybe we're all Kate and it's a metaphor. With how good this show is, does it even matter anymore? Answer: No. I'll watch anyway. And if you've stayed with me this long, I suspect you, will, too.