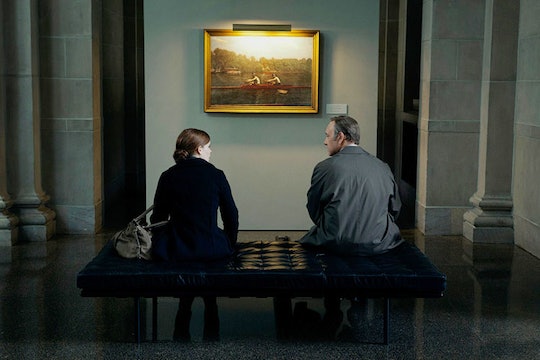 Is Kate Mara Returning To 'House Of Cards'? Frank's Past Might Come Back To Haunt Him

(Warning: Major spoilers for Episode 6 and on of House of Cards Season 4.) It finally happened. Frank Underwood had to face those he has burned, and oh — revenge is sweet. In the sixth episode of House of Cards Season 4, Frank is visited by Zoe Barnes, you know, the woman he shoved in front of a train in Season 2? She's also the woman he had a standing working relationship with for his political gain. The same woman he also had an affair with. Yes, Kate Mara is back in his nightmares, and serving up some real deal terror for the things he has done. So, because Zoe was in this nightmare of Frank's, does this mean that Kate Mara is returning to House of Cards?

It had been a traumatic time for Frank Underwood when Zoe came to him in his nightmare. Maybe all of the terrible things he had done recently forced him to recall the trauma he has orchestrated for others in the past? It's not like Frank has ever really been one of the good guys, so it is about time his past caught up to him and he is forced to face those he's hurt (read: killed.) One of those faces is Kate Mara's, who played Zoe Barnes in Season 1 and 2 (kind of) of House of Cards. Zoe met an untimely fate when she was pushed in front of a train by Frank because she was getting too close to revealing him for the slime he is. It was — in a word — gutting.

But, after a two season hiatus, Zoe is back — well, in a way. After Frank is shot by Lucas Goodwin, he is rushed to the hospital and expected to die unless he gets a donor liver in time. There, he falls into a nightmare that features all of the old players of his past. Picture walking into a room of all your exes — well, that's kind of what this was, except Frank walked into a room with all of the people he killed. Luckily, these people are dead and just part of his imagination, so they can't do any real harm, like push him in front of a train. (Years later, and I'm still really mad about that scene, if you can't tell.)

Even though I would like to say that Kate Mara is returning to House of Cards, it's pretty certain that she's not. Her appearance in the episode was a one-off, allowing her and Corey Stoll (Peter Russo) to torture Frank in his dreams. But, let's not lose sight of how amazing that scene is. We might not get to enjoy Zoe Barnes in the rest of the series — unless the show takes an unexpected turn towards the supernatural, which I'm not against — but at least we got a little taste of what could have been.