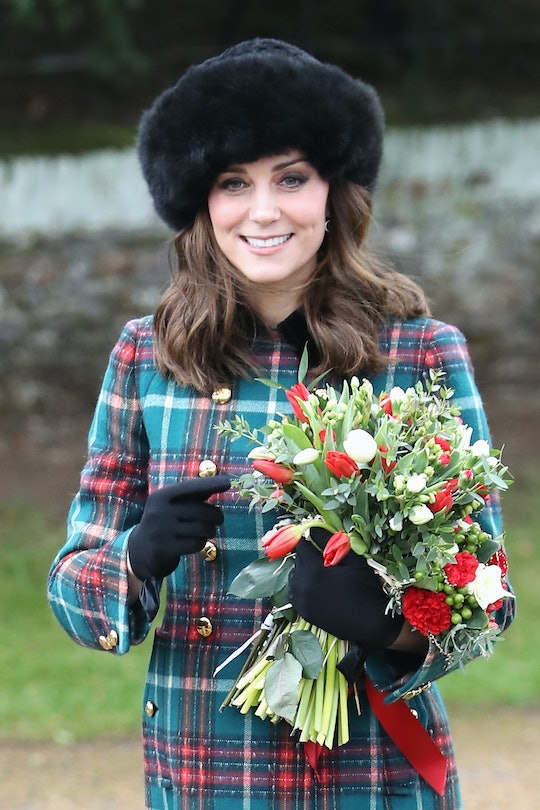 Fans Have ~Theories~ About The Sex Of Kate Middleton's Next Baby

Ever since Prince William and his fabulous wife announced that they are expecting another baby, people have been trying to guess the details. While the family has yet to announce the sex of the baby, fan theories about whether Kate Middleton is having a boy or a girl have attempted to answer the question. There has been no confirmation of yet, but the internet super sleuths have found plenty of potential "clues" to read into.

Middleton and Prince William officially announced the pregnancy in September and fans have been in a frenzy ever since. The new baby will make their third child. Their eldest, Prince George, was born on July 27, 2013, followed by Princess Charlotte on May 2, 2015. Middleton is due with her third baby in April of 2018, according to E! News. Aside from her estimated due date and details about her severe morning sickness, little information has been revealed about the baby.

In particular, the royal family is keeping the sex of the baby under wraps for the time being. Instead of a gender reveal, the couple plans to "leave it to surprise this time," according to an annonymous source at Us Weekly. They also opted out of sharing the sex of both George and Charlotte before their births as well, so it is not all that surprising. Regardless, this decision has done little to quiet the rumor mill.

Most recently, the family's choice of color scheme for their Christmas card has many believing that the new baby is a boy. The photo shows the four royals dressed in baby blue, a color commonly associated with little boys. Many reports on the photo state that it was taken during the summer before Prince George's fourth birthday, raising questions about why the family went with an older photo instead of one showing the Duchess in her second trimester of her pregnancy. Some believe that the reason is a hidden meaning in the colors of their outfits, subtly sharing that the new baby is a boy.

Even before the Christmas card was released, fans were already posting to Twitter sharing their predictions that the new little is a boy. Between plain old intuition and potenial psychic abilities, there are a lot of ideas out there. Fans are even speculating about what the baby's name will be.

The Christmas card color scheme isn't the only thing causing people to think the baby might be a boy. Express U.K. used an ancient Chinese birth chart to predict the baby. The chart, based on the Chinese Lunar Calendar, combines mother's age and month of conception to predict gender. When these two factors are matched up for Middleton, they point to a boy. While this is far from a technical prediction, it sure is fun to use.

Despite these predictions, some people on Twitter are still holding out hope for a baby sister for Charlotte.

False headlines may have been the source of these speculations, with several different outlets claiming that Middleton was having a girl, or twin girls. These reports have since been debunked, but they caused quite a stir.

Even if fans are stressing about the sex of the baby, the family doesn't seem to be doing so. Another source close to the family told Us Weekly that the couple is taking it easy this time around:

They’re taking each day as it comes. After you’ve had two children, the third usually feels like somewhat of a breeze so they’re just focused on Kate and the baby’s health right now. Everything else can wait.

As interesting as the sex of the baby may be, it is certainly not the most important part of Middleton's pregnancy. All reports state that, aside from some serious morning sickness, mom is happy and healthy. Ultimately, it is up to the family to decide when the big news will be broken and until then, fans will just have to wait.