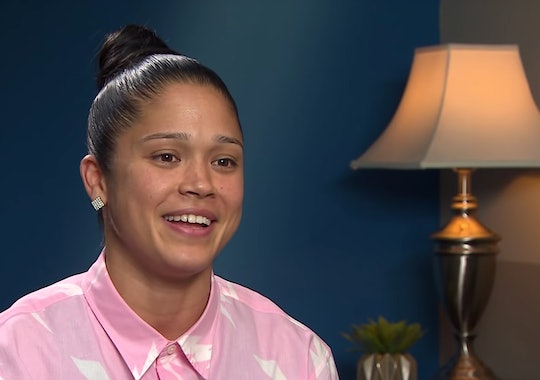 Big Brother first premiered in the United States way back in 2000, and the show is still going strong — it's currently in its 20th season. Every season, a few houseguests stand out, and one of this season's frontrunners is Kaycee Clark. Given that this season's theme is technology, fans are likely wondering: Is Big Brother's Kaycee Clark on Instagram?

Big Brother 20 premiered on June 27 of this year on CBS, and fans can watch a live stream of the house at pretty much all hours of the day on the CBS website. If you watched the show's most recent episode, you know that Kaycee, a 30-year-old pro-football player for the San Diego Surge, is currently the Head of Household (HOH), according to Gold Derby. It's always fun when reality show contestants update their Instagrams when the show is airing, to give fans little behind-the-scenes looks. However, Big Brother 20 is airing in real time. Every contestant who has not been eliminated is in the house right now, at this very moment. And, as with most reality shows, Big Brother houseguests are not allowed to have cell phones with them in the house (even though the season's theme is technology, LOL).

That means that contestants who wanted their Instagrams to stay active while they were in the house had to turn their accounts over to friends, family, or fans. An Instagram profile under the username @kcsince1987 used to be run by Kaycee herself — but since leaving for Big Brother, her page has turned into a fan account.

These days, the account is filled with photos and videos of Kaycee from Big Brother, as well as fan art and regrams from other Kaycee fan accounts. It's hard to tell exactly who is running the account in question, but a few signs point to her brother, Kenny Clark. @kcsince1987's Instagram bio states, "If you want to grow your IG, DM @officialkennyclark." Additionally, there's a video @kcsince1987 shared on Aug. 17, which is footage of a television showing Kaycee competing (and hilariously falling down a lot) in a slippery Big Brother challenge. "Poor Kaycee. I guess it's harder than it looks. She gotta win the next one," the caption reads. "That's our mom dying laughing in the background. Hilarious."

In the background of the clip, a woman is heard laughing hysterically, another voice says, "Oh, Kaycee..." and another says, "Breathe, Kaycee, breathe!" Their words and laughter make it seem like they just may be Kaycee's family, as do a few comments on the video. "Love her mom's laugh in this video," one fan commented. "I just love her Mom's laugh. So cute!!!" another added. "😂 her mom," another commented. These fans clearly seem to think her family is behind the account — which would make sense, considering how close she is with her family. When asked what items she would you take into the house in an interview with CBS, she replied, "Pictures of my family, which I already know is not allowed, because they are my motivation."

Even though Kaycee isn't running her Instagram account right now, the page has plenty of posts from before her Big Brother days. Several of her final posts from before she surrendered her phone in June feature her friend Shahzi, who she refers to as her "Famie," aka her family and roomie.

She has also shared plenty of photos with her family. "Always a good time with my family," she captioned the below photo. "This group right here I been through so much with! Love you little chicken nuggets! ❤❤❤"

So even though it's great that Kaycee's Instagram continues to be updated, the hands-down best way to keep up-to-date on her life is simply watching Big Brother and the live streams. Good luck, Kaycee!