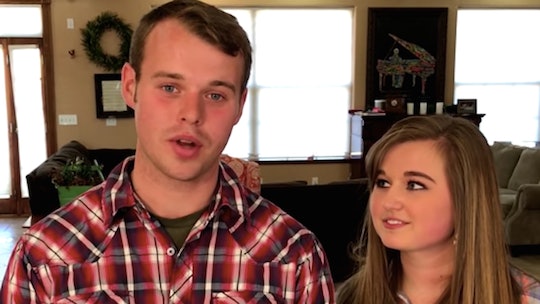 Is Kendra Duggar A Feminist? All Signs Point To 'Hell No'

It wouldn't be Counting On without the addition of more Duggars, would it? The latest Duggar family member to walk down the aisle was Joseph, Michelle and Jim Bob's seventh child. On Sept. 8, Joe, 23, exchanged vows with Kendra Caldwell, 19, in a classic, Duggar-style wedding. (All 5 million of them were invited.) Not even three months into their marriage, pregnancy rumors have already been swirling around the newlyweds. Which, let's be honest, considering the Duggars' track record of rapidly reproducing following nuptials, it wouldn't be too much of a stretch. Naturally, fans of the TLC series are curious about the newest Duggar. Many might wonder, too: Is Kendra Duggar a feminist?

For those who aren't familiar with the couple's backstory, Joseph and Kendra are longtime friends who met at church when they were young, according to Us Weekly. Joe and Kendra confirmed their courtship in March of this year and became engaged at Joseph's sister, Joy-Anna's wedding in May. Like most Duggar relationships, it's been a whirlwind romance. "It's kind of a crazy feeling that we're husband and wife now," Joseph told TLC after the ceremony. "I don't think all of that has sunken in yet."

So let's take a look at Kendra's background to see what feminist ideals may have been instilled in her. In Touch Weekly reports that she is one of the seven children of Paul and Christina Caldwell. The Fayetteville, Arkansas, family is well-known in the area, as Paul is the pastor at Lighthouse Baptist Church. According to the publication, Paul is also a former Republican candidate for the Arkansas House of Representatives. Apparently, back in 2014, the pastor's church passed out controversial flyers allegedly "questioning if God loves LGBT people."

If you look at the dictionary meaning of "feminism," Merriam-Webster defines it as "the theory of the political, economic, and social equality of the sexes." Well, yes. And as a feminist myself, I would also expand that to include equality in a general sense — whether it's based on gender, ability, age, gender identity, or sexual preference. With this in mind, I'd have to say that potential homophobic upbringing = zero points added toward Kendra being a feminist.

Another reason I'm not convinced Kendra is a feminist is that the Duggars are part of the Quiverfull movement, according to The Daily Beast. This sect of evangelical Christianity is known for emphasizing patriarchal values, shunning all types of birth control, forbidding women and mothers from working outside of the home, among other conservative practices. Essentially, power over a woman is transferred from her father to her husband upon marriage, according to Salon. Um, yeah. None if this particularly embodies the whole feminism vibe.

And per Michelle Duggar's advice, her daughters are encouraged to fulfill their husband's physical needs — even if they're not really up for it, according to Us Weekly. “So when you are exhausted at the end of the day, maybe from dealing with little ones, and you fall into bed so exhausted at night, don’t forget about him because you and he are the only ones who can have that time together," she wrote in a 2015 blog post. Michelle continued:

No one else in the world can meet that need. And so be available, and not just available, but be joyfully available for him. Smile and be willing to say, ‘Yes, sweetie I am here for you,’ no matter what, even though you may be exhausted and big pregnant and you may not feel like he feels. ‘I’m still here for you and I’m going to meet that need because I know it’s a need for you.’

So women should have sex with their men, even if they don't want to? Sounds pretty feminist to me. *Eye roll*

Furthermore, under the Duggars' religion, (which is also shared by Kendra, as the Duggars frequently attend the church at which her father is a pastor,) women are taught to guard their sexual purity. Which, whatever. You do you. However, they are also responsible for the purity of men, The Daily Beast reports. And as children, at least, the Duggar girls weren't allowed to wear pants or sleeveless clothing, for fear they might inadvertently arouse an unsuspecting male. According to E! News, the Duggar sisters wrote in their book Growing Up Duggar, that women "have a responsibility not to dress or act in a way that builds up sensual desires in guys."

Yeah. So I'm gonna go with a big, fat "no" on the idea that Kendra Duggar is a feminist. Being generally submissive to men, covering their bodies for the sole purpose of men, not being allowed to work, being taught to have sex when they don't want to, forbidding birth control — all of this things are just no. Although I don't know much on her upbringing, other than that homophobic flyers scandal her father was involved in, let's face it: Kendra married a Duggar. Which means she must be okay with all of their patriarchal nonsense, or she's at least going along with it for the time being. And that's decidedly not feminist. Not in the slightest.