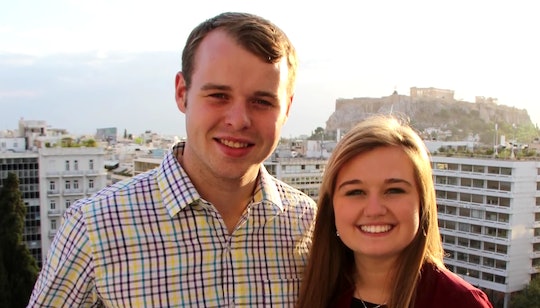 Is Kendra Duggar A Midwife? She's Giving Birth To Her Own Baby Soon

It can be hard to keep track of all the Duggars and their spouses. With 19 kids in the main Counting On family, it's difficult enough for even fans to remember who is who and what every member of the family is up to. Add in the fact that many of the adult children are married, and some have kids, and things get even more confusing. But with a little research, it's not hard to figure out what each member of the family does when the cameras are off. For example, we know that Jill Duggar Dillard is trained in midwifery, but what about any of her sisters or sisters-in-law? Is Kendra Duggar a midwife? She's Joseph Duggar's wife, and expecting a baby of her own very soon.

Joseph is the seventh of the Duggar children, according to E! News. Many of his older siblings got married and started families before him, and he and Kendra actually got engaged at the wedding of his younger sister, Joy-Anna Duggar Forsyth, in 2017, Us Weekly reported. They got married later that same year, and are now excited to be expecting their first child together. Kendra and Joe previously announced that the baby is a boy, People reported.

The truth is, we don't know a whole lot about what Kendra does every day based on her appearances on Counting On. She doesn't seem to have a social media presence, either, so no clues there. She did pop up on her brother-in-law Josiah Duggar's Instagram recently, however, where fans got a peek at Kendra's baby "bump," according to In Touch Weekly. She and Joe seem to be fairly private about their lives together, especially compared to some of the other Duggars who are very active on social media.

For the most part, the Duggar women don't seem to work outside of the home. Michelle Duggar, mom of all the kids from 19 Kids and Counting, is a housewife, and her married daughters seem to have followed suit. Jessa Duggar Seewald keeps busy as a mom of two boys — Spurgeon Elliot and Henry Wilberforce. Jinger Duggar Vuolo recently showed an interest in roasting coffee beans on Counting On, and maybe in opening a small business to do that — but that was before she became pregnant with her first baby, and she may be busy with motherhood and housework (unless it's split between her and her spouse) in the future.

One Duggar daughter in particular did kind of pursue a career before becoming a mom, however, and she may still be doing some work in her field now.

Jill Duggar Dillard is officially certified as a professional midwife, according to People. But she appears to be the only Duggar with this official training, even though her sister, Jana, did do some midwifery training with Jill.

It's anyone's guess how much Jill uses her skills as a midwife these days. She also has two sons herself — Israel and Samuel. People did report that Jill was at Joy's side when she recently gave birth to her son, Gideon, but it's not clear whether she was there officially as a midwife or just to support her younger sister.

There's no evidence that Kendra has shown a public interest in being a midwife, or any hints that's she's ever had training to be one in the past, so she's probably not practicing midwifery. And she hasn't revealed whether she's going to attempt to have a home birth herself, like her sisters-in-law Jill and Jessa, and whether the midwife in the family would be on hand for that. Kendra's birth plan is unknown to the public at this point, but of course, how she chooses to try to welcome her son into the world is not really our business unless she wants to make it our business.

While it doesn't appear that Kendra is a midwife, we also don't have a very good idea of whether she has a career at all, or whether she might want to be a midwife in the future. But she's fairly new to the Counting On family, so fans are still learning more about her. And there's always a chance that midwifery is something she'll choose to do later on.