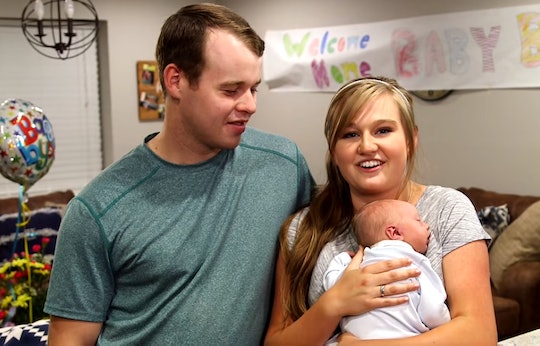 Kendra Duggar's Education Views Are Probably Just What You Expected

It's getting harder and harder to keep track of all the members of the Duggars. Now that the older children are marrying and having their own kids, the reality TV family is growing exponentially, and as they go out into the world, some of them are starting to follow their own paths, rather than the very rigid one laid out by their parents. With little glimmers of rebellion cropping up, fans might wonder if the youngest in-law, Kendra Duggar, is in college. She just turned 20 years old earlier this month, and though she's also a newlywed with a new baby, moms can do anything they set their minds to, including getting an education while running a household.

Unfortunately for those who hoped that she'd buck the trend of "no fancy book learnin' for womenfolk," it seems that Kendra is following in the footsteps of her mother-in-law, Michelle, as well as sisters-in-law Anna, Jana, Jill, Jessa, Jinger, Lauren, and Joy-Anna: she'll most likely be staying home with a baseball team's worth of babies while her husband flips houses and ministers to heathens. To be clear, that's a valid choice! But some fans are worried that it's not a choice, or at least, not Kendra's.

As is customary with the Duggar family, Joe and Kendra's romance was something of a whirl wind. They met in September 2016, according to People, and announced their "courtship" (sort of a pre-engagement) six months later. Three months after that, Joe proposed to Kendra — at his sister Joy-Anna's wedding, which some might feel is very rude — and by September 2017, they were married. When the Duggar family shared the couple's wedding announcement on Facebook, the post was inundated with criticism from fans who had concerns that Kendra, who had only just turned 19, didn't know what she was getting into.

"She doesn't get to pursue an education or explore other avenues," one fan commented, according to In Touch Weekly. "She has been raised to be subservient to a man and to be nothing more than a breeder. It isn't something to celebrate. It's incredibly sad." Another described the new bride as a "poor, young, brainwashed girl." Eventually, the backlash drove the Duggars to delete the post from their page, CafeMom reported. That site was quick to point out that at least some of the Duggar wives have enjoyed a modicum of freedom after leaving the nest — Jinger sometimes wears pants now, for example — but that freedom is usually seen when Duggar daughters marry. Kendra, on the other hand, married into the family, meaning that her husband is more likely to have the same expectations (rules?) as his father, Jim Bob, as opposed to someone from outside the family.

Adding to the evidence that Kendra will fit right in with the subservient Duggar woman is the fact that she was raised in a similar fashion, and appears to have been just as isolated from the outside world as her husband's family. In fact, the only members of her bridal party were her sister, her mother, and seven of Joe's nine sisters — zero friends.

It's unknown whether Kendra had any formal education before marriage, other than "taking a Bible college course through our church" at 15, as she referenced on the couple's website. Her father, Paul Caldwell, is a pastor at Lighthouse Baptist Church, whose to fame is sending children out to post pamphlets on the doors of homes in Fayetteville, Arkansas claiming that "there are no such things as Homosexuals," in case you're wondering what her home school curriculum was like.

And of course, it's highly doubtful that the Duggars would look kindly upon a wife in their family being better educated than her husband. Joe is actually the most educated in the family, since he attended a little bit of college — and I use college in the loosest possible sense. According to a very proud Facebook post from Michelle on Joe's 21st birthday, he completed one year at Crown Bible College, which boasts accreditation from the Transnational Association of Christian Colleges and Schools, a group that was created solely to legitimize unaccredited schools that teach creationism and reject science. That's a pretty low bar for Kendra to stay under; don't expect her to be filling out college applications anytime soon.