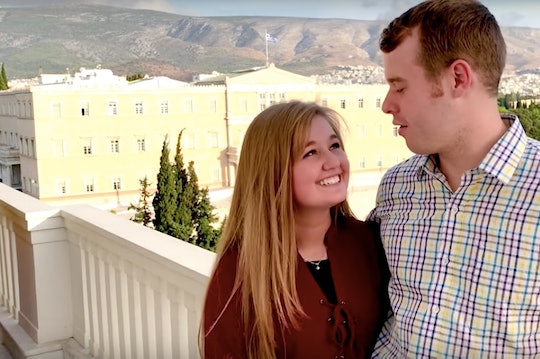 Is Kendra Duggar Pro-Life? Here's What We Know

It's unclear as to whether the world was ready for the Duggar family when they first appeared on TLC's 17 Kids and Counting, which later became 19 Kids and Counting... and then became Counting On when the Duggar kids started popping out their own kids. Speaking of kids, just two months ago TLC released an exclusive interview with Kendra Caldwell and Joseph Duggar, who announced that they're expecting their first child, and that left fans of the family wondering, is Kendra Duggar pro-life?

Joseph, who is the son of Jim Bob and Michelle Duggar, began courting Kendra in March after six months of just talking. He's now the sixth member of the family to make it down the aisle, since he popped the question at his sister Joy-Anna's wedding in May, according to In Touch Weekly. He finally married Kendra, 20, in Siloam Springs, Arkansas in September, the Daily Mail reported. Then the newlyweds honeymooned in Greece and, in December, they broke the news that they're expecting a baby.

Kendra met Joe in church, according to In Touch Weekly, and they immediately fell for each other's views on faith and religion, which likely include anti-abortion views, though Kendra has yet to explicitly state her stance on abortion.

Followers of the family would assume that Kendra is anti-abortion, especially because all of the Duggar women are pretty vocal about their "pro-life" views. Jessa Duggar Seewald celebrated the impending birth of her second child with a baby shower in January, where she made her views on abortion super clear. She donated all the gifts she received to an anti-abortion organization, according to the Daily Mail, called Arkansas-based Loving Choices Pregnancy Center. Oh, and there was that time Jessa and her then-fiancé, Ben Seewald, visited the United States Holocaust Memorial Museum in Washington D.C. and wrote about the "sobering" experience in an Instagram post, which compared the systematic murder of 15 to 20 million people, according to recent research, to abortion. In a post on the family's blog, the Duggars again described abortion as "An American Holocaust," BuzzFeed reported.

In fact, all of the Duggar's eldest daughters — Jana, Jill, Jinger, and Jessa — speak out against abortion in their book, Growing Up Duggar. "Don’t allow anyone to talk you into taking the life of your child," they wrote. "Your baby is not a blob of tissue! … It’s a baby from the time it is conceived."

So, one would assume, given all the family rules, that a Duggar son would have to marry a woman who is against abortion.

Kendra is also the oldest of seven children from an equally strictly conservative background, according to The Hollywood Gossip. Her siblings are Lauren, Micah, Nathan, Timothy, Olivia, and Jesiah, according to In Touch Weekly, and they all share similar views with the Duggars regarding relationships and child-rearing.

"Our families are close friends through church, and this has allowed Kendra and me to get to know each other," Joseph told In Touch Weekly. "Right when we started talking we really hit it off really well."

The family loves Kendra, too. Probably because her father is Pastor Caldwell, according to International Business Times. As the pastor of the Lighthouse Baptist Church, he came under fire a few years back when his church printed flyers about the LGBTQ community asking the question, "Does God love homosexuals?" In Touch Weekly reported. He also held office as an anti-abortion Republican — Josh Duggar, who once held a position on the anti-abortion Family Research Council, had tweeted: "Follow my friend: @PaulGCaldwell. He is a Pastor who is running for State Representative in District 90 in Arkansas. #conservative#leader."

So while Kendra hasn't been as forthright with her views as the rest of the Duggar clan, all signs point to, yes, she's probably anti-abortion, too.