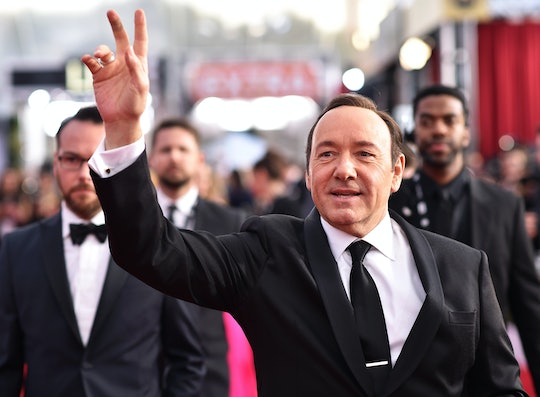 Is Kevin Spacey A Democrat Or Republican? The 'House Of Cards' Star Is Super Passionate About Politics

While the real presidential candidates are gearing up for Super Tuesday, fans of Netflix political drama House of Cards are looking forward to the show's return on Friday. On March 4, the fourth season of the Washington, D.C.-based series that features Spacey as the fictional President Francis Underwood, kicks off — and interestingly enough, the show's political timeline just so happens to fall in line with the real 2016 election. Spacey himself isn't one to shy from political conversation in real life, either. But is Kevin Spacey a Democrat or Republican?

When he's not playing the role of Underwood, a South Carolina Democrat of sorts, some of Spacey's views seem to mirror the left-of-the-aisle leanings that Underwood espouses in House of Cards — minus the scheming and plotting, of course. He also isn't afraid to talk about both the show and real life in the same breath, although he makes sure to keep them widely separated. When asked whether Season Four of House of Cards or the current presidential election would prove more surprising, Spacey lamented the trend of outlets throwing journalistic integrity away for good ratings before explaining to The Hill,

It’s sort of silly to compare the two. They’re both a little bit unpredictable in that audiences have no idea where we’re gonna go and what we’re gonna do, and I think that’s part of the enjoyment that an audience has — they don’t really know. And in the real world — I mean now it’s becoming a little bit more predictable, what’s going to happen. At the same time, I happen to believe that we get what we deserve.

Spacey has actually been pretty vocal on the 2016 presidential candidates, as well. At the World Economic Forum in Davos, Switzerland, Spacey compared Donald Trump's campaign to George Wallace's campaign in 1968. (Wallace was also a populist governor who favored racial segregation. Ouch.) Spacey told forum attendees his House of Cards character, Underwood, would find the current presidential campaign "amusing." And when asked by CNN's Dana Bash whether Spacey's character would beat Trump in the 2016 election. Spacey said,

He would kill Donald Trump. That’s number one. Trump would never make it to election day. Done. Over.

Spacey's involvement and interest in Washington affairs began way before the current presidential race. Back in 2013, Spacey told Hot Press magazine he thought President Obama deserved more recognition for what he had accomplished. In the same interview he also went on to throw a jab at Congress and its inability to get anything passed.

Taking a look at the actor's past, it's easy to understand his passion for politics. When he was in high school back in 1976, Spacey worked on Jimmy Carter's presidential campaign. According to his interview with Hot Press, Spacey was also very close with former President Bill Clinton, and had connections to Teddy Kennedy and Pat Moynihan. Spacey explained that being around powerful figures in the political scene made settling into the role of Underwood easier.

I don't know about you, but with how vocal Spacey has been lately on the topic of politics, I'm really curious about what he might say after the Super Tuesday results come in. Actually, who am I kidding, what I'm really waiting for is the House of Cards Season Four premier on Friday, just like everyone else.