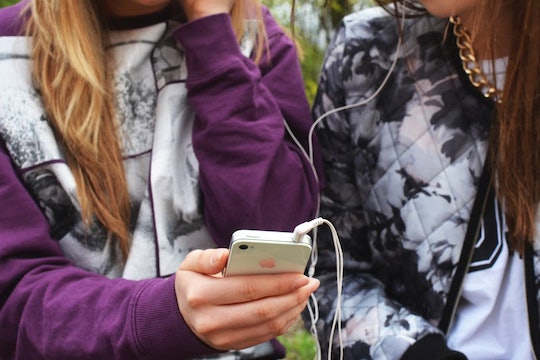 FYI, This Popular App Among Kids Is Actually Swarmed With Sex Offenders

Even if you've never heard of Kik, chances are that your kid has. In fact, 40 percent of American teenagers have reportedly interacted with the app, so parents all want to know: Is Kik messenger safe for kids? The app has recently been linked to controversy after an investigation found that its ease of access to minors has reportedly drawn in a slew of sex offenders. Romper has reached out to Kik for comment and is awaiting a response.

Update: A spokesperson for Kik told Romper in a statement: " We take online safety very seriously, and we’re constantly assessing and improving our trust and safety measures." Kik explained in the statement that it encourage users to report content that they believe violates the Kik Terms of Service and Community Standards."

If a user finds that someone has violated the app's rules and regulations, they can block users and "actions are taken against users found to have violated" these stipulations," according to the statement.

Kik also noted that it works through "education and partnerships with organizations that help adults and teens understand the challenges of today’s online landscape and how to avoid bad situations." Moms and dads who are concerned about the app can look at the Kik's safety guide for parents.

Previous: Kik is reportedly "the de facto app for grooming children online," officials have found, according to an investigation by Forbes and Point Report, which helped uncover the multiple ways that child predators use Kik.

Here's what the report found: There are Kik groups dedicated to images of child pornography, consisting of hundreds of users. Also, young users are easily targeted by others through chatrooms. To test this type of interaction, the investigators created false profiles of their own, posing as young teenagers. The profiles were soon contacted by other users, whose messages consisted of aggressive language and even the immediate sending of graphic, nude images.

Young users are also put at risk in that these users remain on the platform, despite their behavior. "Kik hasn't even been deleting the profiles of individuals charged and convicted of child abuse offenses," investigators found, according to the report.

So how does all of this anonymity persist? To create a Kik account, users provide a name, birth date, username, and email address — and that's it. No phone registration is required, so there isn't a way to confirm a user's identity, leading to a virtually infinite number of potential profiles. The company does have access to users' location due to knowing their most recent IP addresses, but "this information isn’t verified by Kik, meaning we don’t have any way to know if it’s accurate," the company shares in its "Kik's Guide To Law Enforcement" document.

Though Kik insists it's committed to "develop[ing] better tools for protecting the users," Sonia Livingstone OBE, professor of social psychology in the Department of Media and Communications at London School of Economics, suggests that "they could build in much more responsive mechanisms in terms of privacy and safety, they could provide warnings." By Livingstone's estimations, "Kik hasn't done any kind of risk assessment, they've allowed for anonymous communication without sufficient privacy and safety controls."

This isn't the first time the app has been tied to controversy and tragedy: In 2016, for example, a 13-year-old was killed by an 18-year-old she met on Kik, and many blamed the app for connecting the two parties, according to CBS News. With its young user base and spotty track record, the scrutiny is definitely warranted.

Kids use Kik to communicate secretly and freely, with people that they know and others who they don't. As this report has shown, there just aren't enough ways to ensure a child's safety on Kik, and the risks are absurdly high. Until the app monitors its groups and user info more closely, it's appears that it's not a safe option for children and teenagers to use.