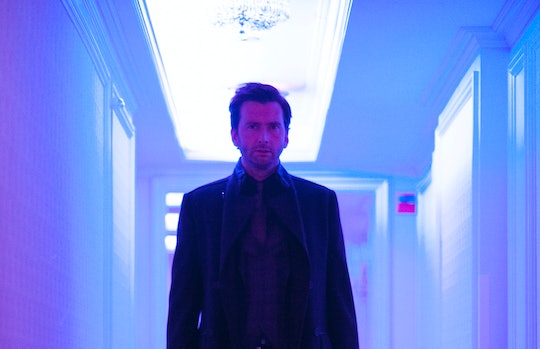 The Fate Of Kilgrave Remains Uncertain On 'Jessica Jones'

Kilgrave's fate seemed final at the end of Jessica Jones Season 1. After he tormented Jessica for 13 episodes, she was finally able to snap his neck, freeing herself from his influence once and for all. He was most definitely a goner — until filming pictures from Season 2 showed David Tennant back on set with Krysten Ritter. So is Kilgrave alive on Jessica Jones, or did the show find some other way to have him return?

Surviving a broken neck isn't impossible, but Jessica surely would have double checked to make sure Kilgrave was really dead before she went on with her night. Coming back from the dead isn't impossible either, at least not in the Marvel universe. After dying at the end of Daredevil Season 2, Elektra Natchios was resurrected just in time for The Defenders, and the trailer for Jessica Jones Season 2 even indicates that Jessica herself was brought back to life after the accident that killed her family. If the right evil organization got ahold of Kilgrave's corpse, he could indeed be alive again.

However, most viewers seem to be speculating that Kilgrave isn't alive at all, and Tennant's presence on set could be easily explained without the character having been brought back to life.

Instead of being alive, the prevailing theory is that Kilgrave is a figment of Jessica's imagination. He's a visual representation of the very real issues she's trying to get past, since so much of Jessica's trauma is centered on the things Kilgrave did to her using his mind control abilities. He raped and abused her. He also forced her to kill other people on his command, and when he returned he invaded her life in every way he could. He even went so far as to buy her childhood home and make her live in it with him for a few days.

Kilgrave may be gone, but Jessica still has a lot to overcome in relation to his abuse, so his Season 2 appearance could be linked to that. Jessica could also have flashbacks to the time she was under his control, though the show was successful during Season 1 in making it clear to the audience what happened without having to depict much of it.

Showrunner Melissa Rosenberg spoke to Entertainment Weekly about how Kilgrave factors into Jessica's story in Season 2. It was important to bring him back for a few reasons, particularly because Jessica is still recovering from the events of the first season. Rosenberg said:

Well, as always, our show is very much about Jessica and her internal life and her struggle, and he's such a part of her construction and her dilemma. I think just having him come back and be that mirror again is really important.

The language Rosenberg used was vague enough not to confirm or deny any of the speculation out there about how Kilgrave comes back. Many are assuming he's only in Jessica's head because it would be disappointing to have him come back for real after her incredibly satisfying triumph over him in the Season 1 finale. However, fans shouldn't worry too much; according to CinemaBlend, Rosenberg has also said, "The show is called Jessica Jones, and it's about Jessica's arc."

Regardless of the form Kilgrave returns in — whether he's just a terrifying phantom or an actual flesh-and-blood man — he's there to serve Jessica's story. He might simply act as a reminder of what she went through (little more than a memory) while she continues on to the next part of her journey. There is a chance that he could be resurrected and return as the main villain, too. But Jessica has already been able to defeat him before, so there's no doubt she'll be able to do it again.