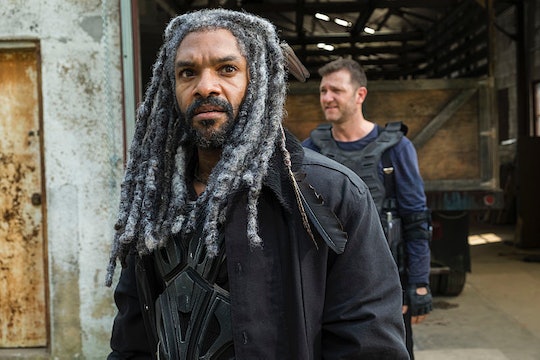 Is King Ezekiel Good In 'The Walking Dead' Comics? He's A Complex Character

The Walking Dead has set up certain expectations in its audience; namely, if something seems too good to be true, it probably is. This goes double for any character who appears to have retained some sense of wonder or joy about the world – any glimmers of hope are generally crushed under the heel of the violent cynicism that constantly rears its head on this show. So upon being introduced to the seemingly kindhearted, tiger-befriending king of the show's newest community, The Kingdom, nerves can begin to set in. Is this new leader all that he seems to be? Is King Ezekiel good in The Walking Dead comics?

Though the comics are not religiously followed on the series, they do provide a blueprint for the general direction of the plot and the big events that occur. Ezekiel is definitely not a villain, but he is a complicated character in the mode of all the heroes in The Walking Dead. Not everything he does is good and not every decision he makes is the correct one, but he is motivated by trying to do the right thing. He isn't trying to abuse or take advantage of others. He deals with his own setbacks, but he also tries to do what's just.

In the comics, Ezekiel ends up being an important part of the battle against Negan and the Saviors. However, in trying to overthrow Negan, Ezekiel also loses a lot in the process in regards to his Kingdom. It seemed obvious as soon as fans caught a glimpse of his beautiful, functioning community that it wouldn't be long before it was plunged into disaster; that's the kind of thing that happens on this show, after all. The fight against the Saviors proves to be a difficult one in the comics, one that costs Ezekiel some of his people as well as his beloved tiger Shiva, and it sends him into a depression. He is eventually able to rejoin the fight, help the Alexandrians and Hilltop members win, and return to the Kingdom, but it's a rough journey.

As with all the characters in The Walking Dead, Ezekiel has moral shadings. His methods may not be for everyone – the theatrics and medieval role play certainly don't work on Carol – but they're grounded in his struggle to try to do the right thing in a world that suddenly has no rules. Ezekiel isn't a paragon of virtue, but he's also not looking to take anyone out with a bat anytime soon. You can feel free to root for him.