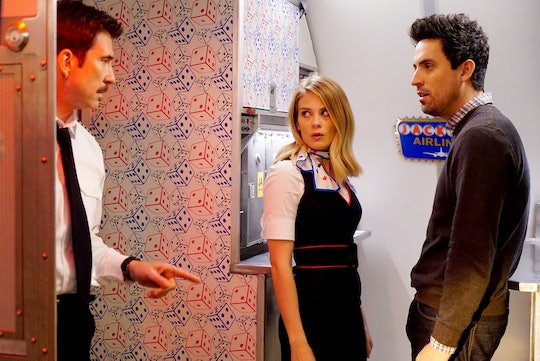 'LA To Vegas' Is Taking Comedy To Greater Heights

With a new year comes new shows, including FOX's new ensemble comedy, LA to Vegas. The new series, which is executive produced by Will Ferrell, follows a flight crew on Jackpot Airlines, which flies from LA to Vegas and back again. But is LA to Vegas based on a true story? Well, not exactly.

Although the show doesn't seem to be based on an actual flight crew or carrier airline, the idea for the show probably did come from the fact that flights like this do exist. For example, Spirit Airlines prides itself on being "the leading Ultra Low Cost Carrier in the United States." Through Spirit you can get a roundtrip ticket from Los Angeles to Vegas for just $79. While it hasn't yet been stated how much that flight costs on LA to Vegas, it definitely seem to fall into the realm of a cheap flight that the show is based around. Besides that though, it appears LA to Vegas is its own show and isn't based on any true events.

The new series, which is also executive produced by Adam McKay (The Big Short), Lon Zimmet (Unbreakable Kimmy Schmidt), and Steve Levitan (Modern Family), stars Kim Matula as Ronnie, a long suffering flight attendant who is so over working for Jackpot Airlines.

Tired of having to deal with bachelor parties and 21st birthdays, Ronnie is about to give up when she ends up in a "location-ship" with Colin (The Mindy Project's Ed Weeks). Colin is a regular passenger on Jackpot Airlines and economics professor, whose son and soon-to-be ex-wife live in Vegas. In other words, his relationship with Ronnie is all kinds of complicated.

Working alongside Ronnie is Captain Dave (Dylan McDermott), a narcissistic pilot whose fighter pilot dreams never quite worked out; Bernard (Nathan Lee Graham), the always positive career flight attendant who actually enjoys the flights from LA to Vegas; Artem (Peter Stormare), a professional gambler who acts as the plane's resident bookie; and Nichole (Olivia Macklin), the part-time stripper who's smarter than people realize.

The show looks to be a hilarious work comedy, filled with hijinks and plenty of mishaps. In the trailer alone, Captain Dave is caught drinking at the bar 10 minutes before he'll be "wheels up," Ronnie and Colin attempt to join the Mile High Club only to discover airplane bathrooms are actually quite gross, and Ronnie offers up beer to the first person willing to change seats but the person she picks is actually pregnant. Awkward.

LA to Vegas will also have some great guest stars beginning with Dermot Mulroney. If you don't know, many people consistently confuse Mulroney with McDermott, so much so that Saturday Night Live even made a game show sketch about their mistaken identities. Mulroney will play Captain Steve, a charismatic pilot with better international routes and an attitude that gets on Captain Dave's nerves.

Surprisingly, this is actually the first time the two actors will be performing together, on either the big or small screen. It'll be interesting to see if the show will play off the fact that the actors often get confused for each other in real life or if they'll just ignore it completely. Regardless, it should prove to be a lot of fun.

If you were an iCarly fan you'll also recognize Nathan Kress in the pilot episode. Kress played Freddie on the popular Nickelodeon series and in the first episode of LA to Vegas he'll be going to Vegas to get hitched. It appears like this will only be a one episode role for him though.