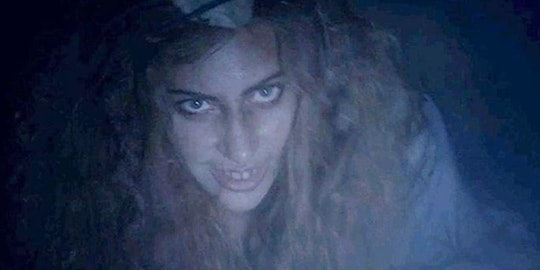 Is Lady Gaga Evil On 'American Horror Story: Roanoke'? We Don't Know Much About Her

We learned quite a bit about one of the apparent "main" villains of American Horror Story: Roanoke on the September 28 episode of the series. While we got an entire lengthy segment dedicated to "The Butcher" (a.k.a Thomasin White, a.k.a Kathy Bates) and her backstory, we're less acquainted with the creature who sparked Thomasin's transformation. That creature is the mysterious character played by Lady Gaga, who, at this point, we know basically nothing about – including what she even is. For starters, is Lady Gaga evil on American Horror Story: Roanoke?

In short: it's hard to tell. She certainly seems to be a figure of evil, based on the actions we've seen her take so far. We first caught a glimpse of this character when Shelby, disoriented after striking the Butcher with her car while fleeing the creepy Roanoke house, stumbled through the woods and got lost. Shelby came across what appeared to be a congregation of the missing Roanoke colonists – by slipping through dimensions or time? – and among the rough group, she saw Lady Gaga's unnamed character. Well, to be clear, first she saw this scalped dude, and then she saw Lady Gaga's character, holding his scalp.

That certainly seems like evil behavior to me, but AHS has been known to pull a fast one on us here or there or twelve times in a given season, so I'm choosing to reserve judgment on this scalping incident until we get the full story. But what about the other seemingly evil things that Gaga's unnamed character has done?

Feeding Thomasin An Animal's Heart & Asking For Her Soul

While feeding someone a heart and instructing them to surrender their soul to you definitely falls into possibly-a-demon territory (it's akin to asking AHS' Thomasin if she'd like to live deliciously), Gaga-woodland-creature did actually save Thomasin from certain death by forest beasts. She was left out in the woods to die by a group of cruel men who treasonously overthrew her as interim leader of their colony. I'm not saying it was cathartic to watch Thomasin take her revenge on that group of jerks... but, okay, yeah, maybe it was a little bit cathartic.

In any case, this seems all but definitely evil – despite any possible good intentions in rescuing Thomasin, soul transactions are always a pretty big red flag for badness.

Having Sex With Matt In The Middle Of The Woods

Now, the documentary format makes this season a treasure trove of unreliable narrators – so while Matt claimed to have no memory of having sex with the mysterious forest lady despite Shelby clearly seeing them together, he may actually be lying. In which case, it would be poorly timed and a little bit unsanitary, but ultimately consensual.

But if Lady Gaga's demon-witch-maenad-whatever thing actually had Matt under some kind of trance, because she needed to have intercourse with him for nefarious reasons? Definitely evil.

While Gaga's character definitely seems to be on the side of evil, we'll just have to keep tuning into AHS to find out what the actual deal is with her character and what her motivations are.