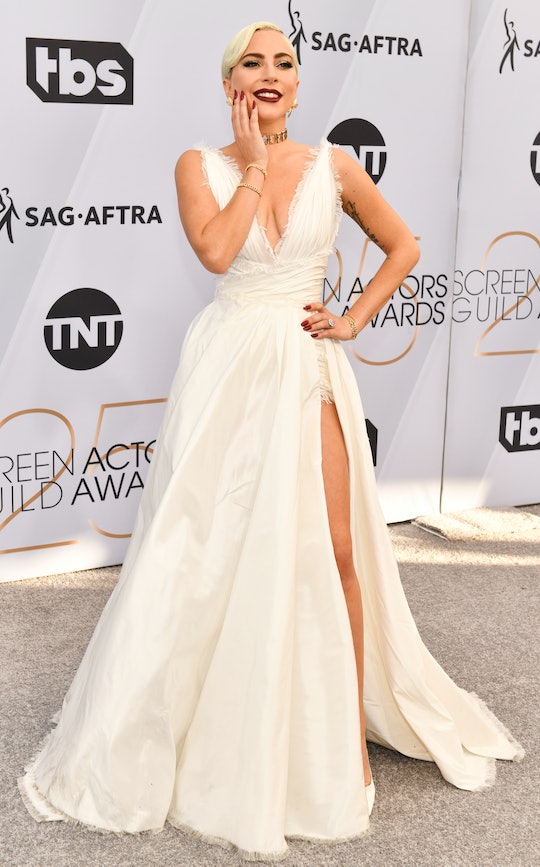 Good News: You'll Get To Catch A Lady Gaga Performance At 2019 Grammys

With eye-popping stage shows and powerful vocals, it’s no surprise that Lady Gaga is one of the world’s most beloved performers. But this weekend, some fans are likely wondering if they’ll get the chance to see all that on display at the 2019 Grammy Awards. Nominated in two awards shows both taking place on Sunday, Feb. 10 — the Grammys and the BAFTA Film Awards — should you expect Lady Gaga to be at the Grammys?

A Star Is Born has performed admirably this awards season with both Lady Gaga and Bradley Cooper nominated in a range of categories. The dual nominations this weekend are causing them to split up, so Gaga will be at the Grammys while Cooper flies off to London to attend the BAFTAs, according to MTV. But Gaga won’t just be attending the Grammy awards — she’s also performing for the "fifth year in a row," according to Entertainment Weekly.

Lady Gaga was announced along with a list of performers, but Rolling Stone singled out Mark Ronson as one she might perform with on Sunday. It wouldn’t surprise anyone if they team up for “Shallow,” the song from A Star Is Born that is nominated for Record of the Year, Song of the Year, Best Pop/Duo Group Performance, and Best Song Written for Visual media, according to Rolling Stone.

Fans will still have the chance to see the original stars team up for the track later this month though; Gaga is scheduled to sing “Shallow” alongside Cooper at the Oscars on Sunday Feb. 24, as MTV reported.

Since the Grammys are arguably the music industry’s biggest night, it’s no surprise that the list of performers is incredibly long and impressive. Gracing the stage will be Chloe X Halle, St. Vincent, Camila Cabello, Cardi B, Brandi Carlile, Dan + Shay, Little Big Town, Post Malone, Ricky Martin, Katy Perry, Diana Ross and more, according to the Recording Academy. Yolanda Adams, Fantasia, and Andra Day will have a special performance honoring Aretha Franklin, the Academy announced.

Gaga is nominated for five Grammys this year; the four mentioned previously for “Shallow” and also Best Pop Solo Performance for “Joanne.” She’s previously won six Grammy awards, including one for that special album she did with Tony Bennett, which won for Best Traditional Pop Vocal Album in 2015, according to Billboard.

A Star Is Born allowed Cooper and Gaga to cement a genuine friendship, which has been on display throughout awards season. At the National Board of Review Awards, Gaga praised her co-star for taking on the risk of vocal performance, the Daily Mail reported. “Bradley, you truly are a musician. I heard it. I watched it... from the moment you sat at the piano with me and sang, to watching you write songs and watching you create,” she raved.

But despite her success Gaga, is still primarily a beloved singer. Catch her doing what she does best live at the Grammy Awards on Sunday, Feb. 10, starting 8 p.m. ET on CBS.