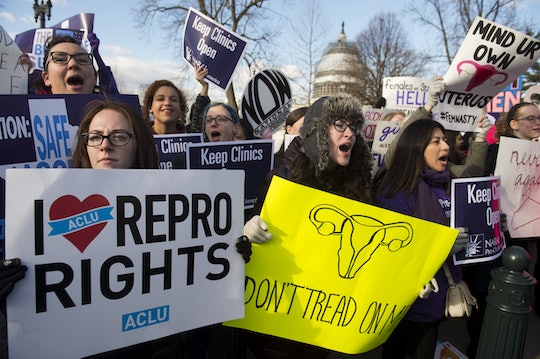 Is Late Term Abortion Legal? It's Not As Common As People Assume

When presidential candidates talk about abortion, the discussion usually ends up revolving around partial birth or late term abortions. But late term abortions aren't even legal in most states and apparently, given Republican nominee Donald Trump's description of "ripping" a fetus out of a womb at the third presidential debate last week, most people don't even know what they entail. There are only 7 states where there are no restrictions at all on when a woman can terminate her pregnancy — Alaska, Colorado, New Hampshire, New Jersey, New Mexico, Vermont, and Oregon, and then also the District of Columbia. Late term abortions are also often confused with "intact dilation and evacuation," (D&X) which is the medical term for "partial birth abortion," which is illegal in the United States.

Most states allow D&X when the mother is at risk but even so, way before the ban was found to be constitutional, they accounted for 0.2 percent of abortions. They aren't as common as politicians would like to have voters think. Neither do late term abortions, since all but those 7 states and D.C. ban abortions either after the second trimester or a certain number of weeks (it's usually around 20 weeks), with some exceptions for the health of the mother.

Another fallacy about late term abortions is that pretty much no one chooses to terminate their pregnancy after 20 weeks, unless their are medical reasons. Women aren't lining up, as Trump seems to have suggested, to at the last minute get their fetus "ripped" from their body in the ninth month. That doesn't exist (although Trump seemed mix up his idea of late term abortions to a C-section, which is very legal and a great way to give birth). If someone is terminating their pregnancy after 20 weeks, it's probably because they discovered a problem with the fetus or with the health of the mother and doctors are more likely to induce labor rather than perform D&X (as long as the mother's body can handle it).

There's no such thing as an abortion at full term the way Trump describes it.

Pro-choice advocates aren't fighting for "ripping" anything out of anyone. But Roe v. Wade says that women have a right to abortion up until viability, while allowing for regulations and exceptions based on the health of the mother, and states without restrictions on late term abortions are upholding that provision. Pro-life advocates are pretty close to all out victory when it comes to late term abortions and the way the discourse around the issue usually goes, it's not likely that will change anytime soon, especially since no one seems to understand what the procedure entails.