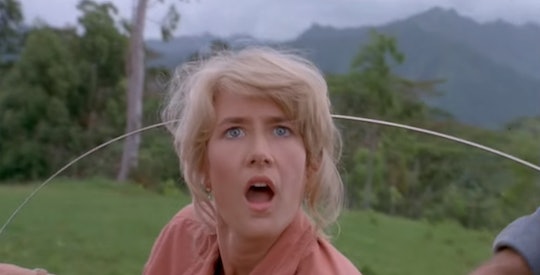 Is Laura Dern In 'Jurassic World: Fallen Kingdom'? She's The Hero We Need

We're just days away from the latest installment of the Jurassic Park franchise, and fans are thrilled to see one of the original characters, Jeff Goldblum's Dr. Ian Malcolm, returning to his roots. But perhaps more importantly, is Laura Dern in Jurassic World: Fallen Kingdom? Her character, paleobotanist Dr. Ellie Sattler, was the heart and soul of the first film, embodying the joy and wonder that viewers experienced when seeing those dinosaurs resurrected on the big screen, and her courage, intelligence, and unapologetic feminism made her a role model for girls and women. Unfortunately, it looks like she's not returning to Isla Nublar just yet.

At the movie's Hollywood premiere on Tuesday, Chris Pratt told Entertainment Tonight that as far as he's concerned, Dern's more than welcome to rejoin the franchise. "Anyway she wants to come in would be amazing," he said, adding that that his "mind is exploding" over the idea of having her appear in Jurassic World 3, which is slated for a 2021 release. "Look, I don't make these calls, but you're hired, Laura!" For her part, it sounds like Dern is on board. Back in January, she told Hollywood Life, "That movie was one of my great experiences and in the zeitgeist of all that we have been talking about, Dr. Ellie Sattler was such a feminist. So I love that character and I think it would be deliciously fun!"

Dern and Pratt aren't the only ones who want to see more Ellie Sattler, either. Entertainment Tonight also spoke to Goldblum back in March, who said that Dern, like her character, is "a very powerful, brilliant woman," and he even may have dropped a hint that it's already a done deal:

I don't want to pass on gossip like my character, but it would be good news to me and to everyone, millions and billions of people all over the world… all over the universe and cosmos when Ellie Sattler returns.

Sure, he seems to be speaking purely hypothetically, but note his use of the word "when" rather than "if."

In the original movie, Sattler was a strong, capable woman who ended up saving the day (and the men). Meanwhile, the female protagonist in the new trilogy, Bryce Dallas Howard's career-minded Claire Dearing, is portrayed as an ice queen who picked her career over having children, while her sister, Karen (Judy Greer) believes that motherhood is a biological imperative. Ellie, on the other hand, models that it is possible to have both kids and a career (if that's what you want), and her son makes a brief cameo in the third installment.

Howard told Cosmopolitan that Claire's famous "running in high heels" scenes were meant to speak to her disconnection from the reality of her job: "this character needed to seem ill-equipped to be in the jungle," she explained. "In the end of the movie, she is the hero." Is she, though? Writer Colin Trevorrow (who also co-wrote the upcoming film) told i09 that Howard "insisted on wearing those heels," because "surrendering the heels felt like surrendering the femininity of the character." But even as Ellie battled velociraptors and got elbow deep in triceratops poop, fans never mistook her for a man. Neither did Ian Malcolm or Dr. Allan Grant, who were too busy fighting over her to notice that people who put poisonous plants all over a theme park are probably ill-equipped to handle giant prehistoric monsters, something Ellie points out early on. "She's a tough feminist, come on!" Dern told Entertainment Tonight last year. "We need her back." We really, really do.