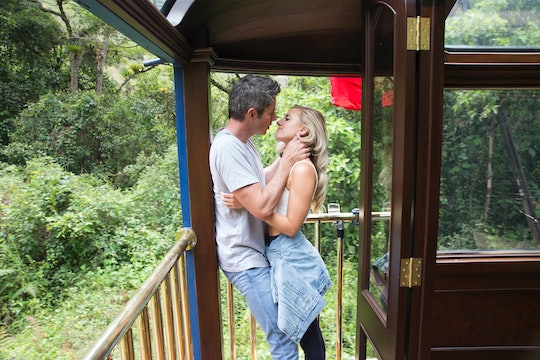 There were a lot of heartbreaking things about Arie's breakup with Becca after he proposed to her on The Bachelor, one of which was Becca complimenting Arie on his ring selection while showing off her sparkler. So now that Arie's marrying Lauren B., I want to know is Lauren B.'s Bachelor engagement ring the same as Becca's? I at least know for sure that Becca and Lauren have one thing in common — and that's Arie. So would Arie really propose to Lauren with the same ring?

I think after Arie broke up with Lauren to propose to Becca with that ring, and then broke up with Becca while she was wearing said ring, that thing is pretty much jinxed. I'm not generally a suspicious person, but if there ever was an engagement ring with some bad mojo attached to it, that would be the one. So I'm not exactly surprised that Arie chose a different ring for Lauren than the one he had picked out for Becca. Perhaps the reason people wondered if it was the same is because it's common knowledge that the contestants don't have to pay for the engagement rings on The Bachelor. That doesn't mean they necessarily get to keep them forever though.

What you may not realize is that if a couple breaks up within two years of their affiliation with The Bachelor, the contract stipulates that they have to give the ring back, as Jesse Csincsak, who got engaged to DeAnna Pappas on The Bachelorette said. That means that poor Becca doesn't even get to keep that huge, beautiful ring even though she got dumped on national television. It also means that theoretically the show could give Arie that same ring to give to Lauren. But that's probably just a little too much, even for The Bachelor.

Becca's gorgeous ring was reportedly three or four carats, and worth an estimated $80,000 (wow). I can only assume that Lauren's ring is just as fabulous, though I don't have the precise numbers on it yet. Past Bachelor and Bachelorette rings have been just as stunning (and just as expensive). Bachelor Ben Higgins gave Lauren Bushnell a ring worth incredible $100,000. That's a lot more than the average wedding costs, by the way.

Arie proposed to Lauren on the After the Final Rose special — which may have been an odd choice considering that the first half of the show (and the last half hour) was devoted to Becca. But Arie got down on one knee right there in front of the studio audience and told Lauren that he truly believed her to be his soulmate. The couple explained that they had already planned to take a vacation out of the country for a little while and that Lauren was then going to move to Arizona to be with her new fiancé.

So while Arie definitely didn't handle everything well, at least he didn't recycle the ring.