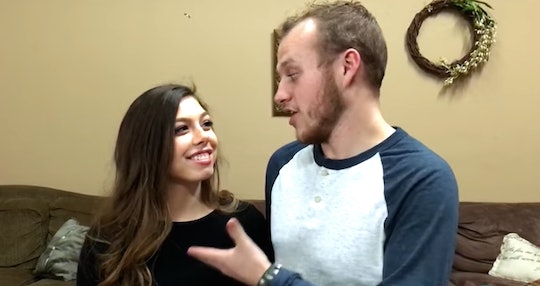 Is Lauren Swanson A Feminist? Here's What We Know About Josiah Duggar's Fiancé

Another day, another Duggar family update. Between the courtships and the weddings and the babies, this famous family is always growing. Most recently, Josiah Duggar announced his engagement to a close family friend. Considering how private many of the lives of Duggar suitors are, fans are looking for answers about the lucky lady. For one thing, is Lauren Swanson a feminist? If not, what do her views look like? The soon-to-be newest Duggar seems to lead a pretty private life and has made few public comments thus far, but there are a few things that are known about her.

Duggar first announced his courtship with Swanson on Jan. 23, sharing with People that the two were taking their friendship to the next level. The big news came in the wake of their trip to Australia and New Zealand along with the Duggar family to attend the Institute in Basic Life Principles conferences. It was just six weeks after the announcement of their courtship that the two made headlines once again with news of their engagement on Monday. The date for the wedding has yet to be announced.

The family announced the engagement via a statement on their website, explaining that the Duggars have known Swanson and her family for "a very long time" and praising her good character.

It would appear that Swanson's values align closely with those of her future in-laws. The family's statement described her as "a wonderful, caring, compassionate young lady, full of zeal for Christ." It went on to say that their hope is that God will put their love to use:

We are very thankful for her. We pray that their lives together will be full of joy and happiness and that God will use their lives for His service. We are looking forward to another Duggar wedding soon!”

Swanson's beau has also sung her praises since entering their relationship. At the time of their engagement, Duggar told People that they are friends first, partners second. He also touched on her character and "tender heart," saying:

She bring sunshine into the room and encourages everyone around her. It’s always stood out to me that in every situation, she looks for the one who appears to be sad or lonely and quickly can brighten their day by sharing words of hope, an encouraging scripture, a prayer or even a simple smile with them.

Aside from her Christian values and desire to help others, little has been shared about Swanson's beliefs, political or otherwise. She, like many unwed youngsters from their belief system, is not on social media. Therefore, we can't examine what she retweets and pick through her posts for feminist leanings — no matter how much I would love to. However, it does seem like she and her fiancé are on the same page for the big issues, which is definitely a step in the right direction.

Since beginning their courtship earlier this year, Duggar has been spending more time with Swanson's family. He spoke in a TLC video regarding his courtship with Swanson about how similar they are to his own family:

They really are very similar to [my] family and have all the same goals. That’s really when I knew I would like to move this further from just a friendship and actually start a courtship.

Overall, much of the Duggar women's beliefs tend to run contrary to feminist ideals. For one thing, the basis of their role in a marriage is submission, according to the Institute in Basic Life Principles that they follow. The family has also positioned itself against issues like trans rights and it is starkly against pro-choice rights and birth control.

Beyond what has been said about her in regards to her relationship with the Duggar family, there is little information out there about Swanson. And she hasn't spoken out on the same hot-button issues as her future in-laws. Fortunately, her coming Duggar wedding will give her the opportunity to expand on her take on things — feminism included.