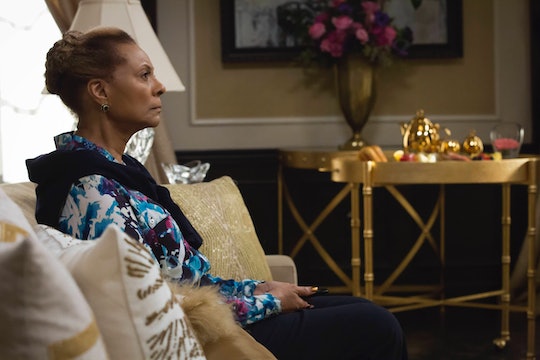 Is Leah Walker Lucious' Mom On 'Empire'? His Past Comes Into Question

As Season 2 of Fox's Empire takes us deeper into Lucious Lyon's past, we face his childhood trauma head on in the music video for his single "Boom Boom Boom Boom," which he also conceptualizes and directs. But, elsewhere in Philly, we see his lawyer Thirsty Rawlins visiting a nursing home, where he throws down an envelope of money for the continued care of an elderly woman named Leah Walker who appears to be suffering from dementia. We also learn during Season 2 that Lucious's real name is Dwight Walker. So is Leah Walker Lucious' mom on Empire?

It seems pretty clear that she is, but that doesn't quite match up with Lucious' account of his childhood. During the filming of the music video, we learn the details of Lucious's experience growing up with a bipolar parent. The video is basically a reenactment of the time his mom almost drowned him as a child during a manic state in which she was trying to "purify" him. As Lucious tells the story, after she realizes what she's done, she commits suicide out of horror over her actions as a parent. Lucious confides in Cookie that a neighbor took care of him, before he ran away to escape social services, sleeping under the statue of a lion in front of his home one last time. It's there, he says, that he got the inspiration to change his name and resort to hustling to survive.

As far as viewers have been led to believe, we have no reason to doubt this version of events. Lucious' mom has been MIA the whole series, with the exception of flashbacks to his childhood (where she's played by the flawless Kelly Rowland), which mostly served as a device to explain the hereditary bipolar disorder in the Lyon family. (Andre, the eldest Lyon son, currently suffers from it and struggles with whether or not to have a child, on the chance that his case might be hereditary.)

But with the appearance of Leah Walker as a old woman, we have to wonder whether Lucious was telling the truth about how his mom died. The most obvious answer is simply that he lied about his mom's suicide attempt, preferring instead to shut her away in a care facility once he had the means to do so, and pay off the staff to keep her identity anonymous. Another possible explanation is that Lucious's mother didn't actually die during her suicide attempt, and her apparent case of dementia is actually a lasting brain injury from a bullet that didn't kill her. Or, Leah Walker may simply be a spare auntie who knows the truth about Lucious' mother and his past whom he prefers to keep at bay. Either way, the appearance of Leah Walker is a huge plot twist to unravel this season.