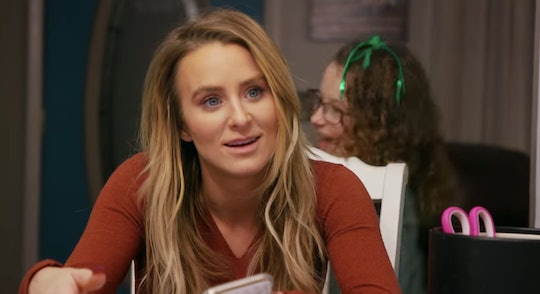 Leah Messer receives a major shock in the Oct. 1 episode of Teen Mom 2, "Truth Hurts." In a clip from the episode on show's official Twitter page, Leah and her sister Victoria sit down for a poolside chat, but the conversation takes a turn when Victoria reveals her big news: she's pregnant. And Leah's sister isn't divorced yet on Teen Mom 2, which complicates the situation further.

When Leah and Victoria first recline in their lounge chairs by the pool, Leah mentions her excruciating period pains. She's not thrilled with her current birth control, though she thinks the pros outweigh the cons; she asks what Victoria's using for birth control, and a noticeable hesitation overtakes Victoria. She isn't using any, because when they returned from their trip to Costa Rica, she realized her period was late. A pregnancy test turned out positive, so she's now expecting a baby with the guy she connected with on vacation.

Leah is understandably shocked by the news and scolds her sister for not using protection, pointing out that pregnancy is only one outcome of unprotected sex. Victoria says her baby's dad is involved and they talk every day, which is when Leah notes that Victoria's divorce from Domenick Crapello isn't final yet.

But that was at the time of filming. Victoria filed for divorce from Domenick several months beforehand and assured Leah that they'd been having problems long before that. According to an anonymous source speaking to Us Weekly, Victoria and Domenick's divorce was finalized during the first week of September 2019. So while she wasn't divorced in Costa Rica and still isn't divorced on the show, in real life she may be officially and legally divorced from Domenick by now.

Victoria and Domenick share a daughter named Cami; Victoria was previously married to Brain Jones, with whom she has daughter Cerenity. On Instagram, Victoria has since shared that meeting her baby's father in Costa Rica "changed my whole life in ways many may or may not understand, but that is okay because you don't have to." She went on to say that she was thankful for what happened, because it taught her "the importance of diversity" and "the true meaning of love."

By the end of the "Truth Hurts" clip, Victoria told Leah that she didn't condone meeting someone else and getting pregnant before her divorce was finalized. But that was what happened and she didn't want to sit around being unhappy because that wasn't healthy for her. Leah said she could lecture Victoria "all day," but she was a grown woman in charge of her own life.

Leah did encourage Victoria to make "better decisions," but it seems like Victoria is satisfied by the outcome of the situation. The week her divorce was allegedly completed, Victoria posted on Instagram that she was ready to "embrace this next chapter." She didn't specify that the post was connected to her divorce, so it may have been a coincidence, but either way Victoria appears to be satisfied in her new relationship and excited to welcome her next child.