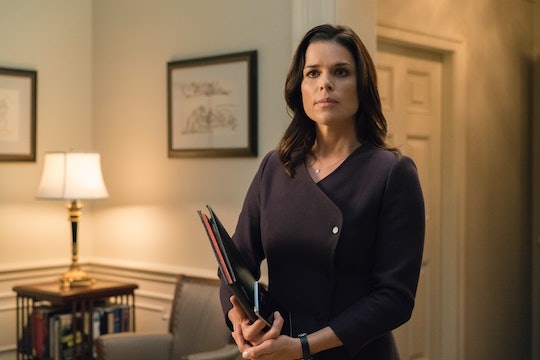 Warning: major Season 5 spoilers ahead! House of Cards snagged Neve Campbell as a series regular on Season 4, playing Claire's campaign manager for a very temporary run at a Texas House seat. But Claire gave that up pretty quickly last season in favor of joining Frank as his running mate on an unprecedented husband-and-wife Democratic ticket. Campbell's character LeAnn Harvey tagged along with the Underwoods to Washington, where she became a member of their trusted inner circle by Season 5. Unfortunately, Underwood cronies don't always make it out of the Beltway alive. So is LeAnn Harvey really dead on House of Cards? The season finale's cliffhanger moment was dedicated solely to her.

After being appointed Chief of Staff to the new President Claire Underwood (talk about a twist), LeAnn got to enjoy victory over her rival, Jane Davis, for all of about half a day before being shown the door. But when you dance with devils like Frank and Claire Underwood, you're bound to get burned. LeAnn knows a lot about what the Underwoods have been up to behind closed doors. Too much. Which could potentially make her a threat. And we all know what the Underwoods do when they feel threatened.

Last we saw of her, she was driving to her new lover (another twist!) Doug Stamper's house, just before getting run off the road. Her car was wrecked, but viewers never saw a body. Frank just turned to the camera and declared: "Sometimes you don’t have to watch the whole movie to know how it ends."

Michael Kelly, who plays Doug, was quick to point out in a joint interview with Campbell for The Hollywood Reporter that his character defied standard TV death rules of "alive until we see a body." He took three blows to the head with a brick at the end of Season 2, but returned for Season 3, albeit pretty severely impaired. "You even saw my body, and Doug still came back," Kelly said.

So House of Cards writers play fast-and-loose with rules like that all the time. The biggest hint we have that LeAnn's really dead is honestly Frank's ability to get sh*t done. Characters who defy death are rarely ones who Frank wanted dead. Take, for example, Rachel Posner, who cheated Frank's scythe for a whole season before Doug finally murdered her once and for all.

For her part, Campbell has remained mum in all interviews on the fate of her character, not just because she can't talk about it, but because she genuinely doesn't seem to know in what direction the writers are going. "Truly, I have no idea what their plans are," she told Entertainment Weekly. "We get excited about the scripts every time they come in and we’re always sort of blindsided by things that occur in them. But I couldn’t tell you what the plan will be."

House of Cards hasn't gotten its Season 6 renewal yet, but I can't imagine LeAnn's life will be left hanging in the balance.