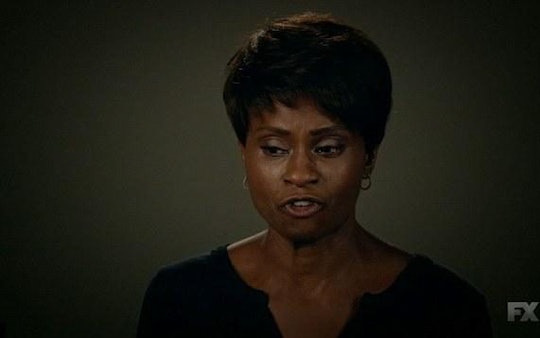 Is Lee The New Butcher On ‘AHS: Roanoke’? She Is Displaying Similar Behavior

American Horror Story: Roanoke is full of a lot of intriguing villains. One of the most popular — and peculiar — this season is The Butcher. While some of us (OK, me) dreamed of Jessica Lange as the real butcher, we were not given such a gift. But, that's OK, because it seems that there is a new butcher in town, and that would be someone that could be the soul survivor of 3 Days In Hell. So, is Lee the new butcher on AHS: Roanoke? She is acting pretty strange for her not to be.

On the penultimate episode of the season, Lee basically became possessed. Or, at least, that's what I'm going to say happened since she tried to kill two of her friends living inside the house (bye, Sarah Paulson and Angela Bassett, even though we don't know if they're Dead dead — since no one really seems to die on this show). Lee also seemed to become possessed, carrying a cleaver and stabbing people — pretty par for the course when you take the gig as The Butcher. And then there is the self-adapted accent which, I'm sorry, is not as strong as Kathy Bates' accent.

Then, of course, there was the whole killing an innocent kid thing that puts Lee's Butcher odds pretty high. Todd, played by Jacob Artist, was taking a tour of the grounds with his friends (Taissa Farmiga being one of them) when he found himself being slaughtered by Lee.

But, I am not positive Lee is the official butcher, based on an appearance by someone who seems to be the real butcher later on. From what we saw from raw camera footage on iCloud, Sophie and Milo were abducted by the real butcher and tortured and sacrificed. Again, par for the course when it comes to The Butcher. They were then burned at the stake by someone who was not Lee, but had very butcher like tendencies, so let's just say that Lee drank the butcher Kool-Aid, but did not fully become the butcher.