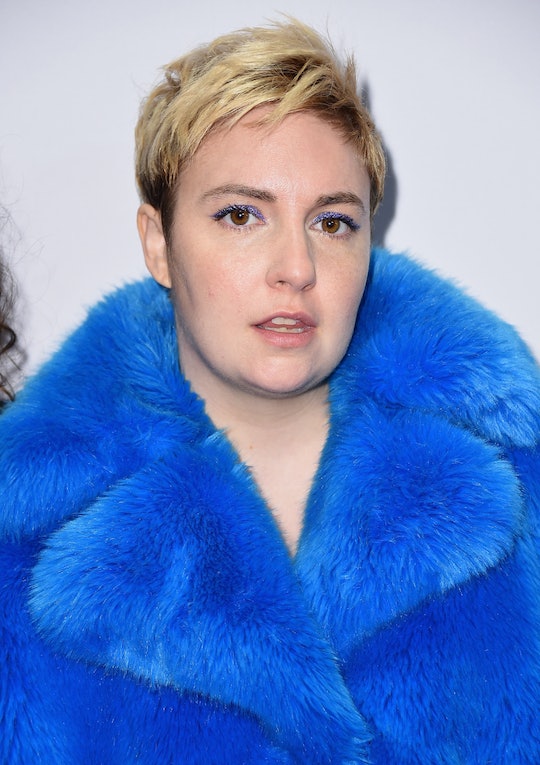 Lena Dunham's Character On 'AHS: Cult' Has An Infamous Past

In Tuesday's upcocming episode "Valerie Solanas Died For Your Sins: Scumbag," American Horror Story: Cult will take a trip back through the decades and welcome a new guest star in the process. As the promo shows, Lena Dunham is making her first appearance on the series, and she's playing someone with a lot of history. But is Lena Dunham's character on AHS: Cult a real person? She's taking on the role of Valerie Solanas, who is indeed based on a real person: the woman who shot Andy Warhol back in 1968.

Solanas was an openly gay, radical feminist at a time when it wasn't particularly easy to be either. She was best known for writing the self-published SCUM Manifesto, which called for the destruction of all men, as well as elimination of money and a female takeover of the government. She also wrote a play entitled Up Your Ass that she tried to get Andy Warhol to produce after crossing paths with him in New York City. She gave him the script, but Warhol wasn't interested and did nothing with it. She took his lack of interest (and later assertion that he had lost her script) as proof that he was trying to steal her ideas. He attempted to make nice by casting her in his film I, a Man, but Solanas' anger was not assuaged.

Solanas tried to get artist and producer Margo Feiden to take on the play and became angry when Feiden would not. Solanas allegedly pulled a gun out of her purse and threatened to shoot Warhol, which she claimed would make her famous enough that Feiden would produce her play. Solanas left to go the Factory, Warhol's studio, and Feiden tried to report the threat to the police. However, nothing could be done about a crime that had yet to be committed.

Solanas waited for Warhol at the Factory for hours and when he arrived she fired off three shots with the gun. Warhol wasn't killed in the altercation, but he was injured: two of Solanas' bullets missed, but the third hit his lungs, spleen, stomach, liver, and esophagus. Warhol wasn't the only person Solanas shot that day, either; she also injured art critic Mario Amaya and tried to fire at Fred Hughes, Warhol's manager. The gun jammed and Hughes made Solanas leave, at which point she turned herself in to the police.

Solanas claimed her reason for shooting Warhol was that he "had too much control in my life." She was eventually sentenced to three years in prison for attempted murder, assault, and possession of a deadly weapon, but it took a year of psychological treatment before she was deemed competent to stand trial. She had been diagnosed as a chronic paranoid schizophrenic. After prison, she was arrested again for stalking Warhol and eventually moved to California, where she died of pneumonia in 1988.

Lena Dunham's portrayal in AHS: Cult won't be the first time Solanas has been depicted on screen. There have been numerous explorations of her life across different mediums, but perhaps the most famous is the 1996 movie I Shot Andy Warhol, where she was played by Lili Taylor. Solanas also won't be the only real person to make an appearance on Season 7 of American Horror Story. Evan Peters will take on the role of Warhol opposite Dunham and there are several other cult figures he'll be portraying over the course of the season.

Warhol wasn't a cult leader in the traditional sense, but he did exercise a measure of control over a dedicated group of followers. Solanas may have felt excluded or pushed aside by Warhol, which is something that could be relevant to this season of American Horror Story. The women following Kai might not want him to be their leader forever; just like Solanas, they might come to feel that he has too much control over their lives.