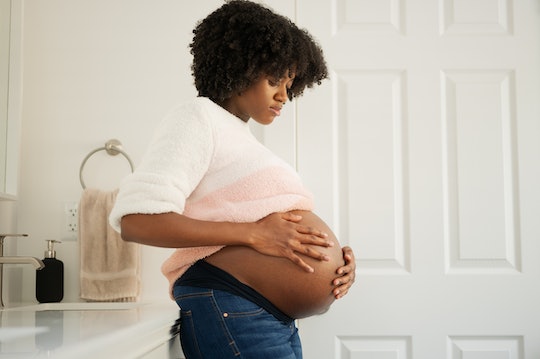 If Your Lightning Crotch Makes You Think Labor's Coming, Here's What You Need To Know

When you’re pregnant, you can expect to experience a slew of new sensations — and most of them happen in your nether regions. Waking up every half hour to pee? Well, that's a great way to prep for the sleep deprivation you're going to experience in the newborn months. Apart from perpetual trips to the potty, though, you might feel other ailments, especially in the third trimester as your body prepares for birth. One of those might be pelvic pain, which is sometimes referred to as “lightning crotch.” But is lightning crotch a sign of labor?

Chances are, you’ve probably experienced lightning crotch as part of your pregnancy journey, even if you didn’t have a name for it. It’s a pain that can stop you in your tracks — literally. WhatToExpect.com describes lightning crotch as a “sudden sharp pain deep inside your crotch,” which can feel like, “a strong jab, perhaps, or an electric shock.” Yowza. But whether you call it lightning crotch or lightning pain, it's "definitely not a medical term," says Yen Tran, M.D., an OB-GYN at the MemorialCare Medical Group in Fountain Valley, CA. So how do doctors define this particular pregnancy symptom? Dr. Tran says lightning pain is "a lay term to describe pelvic pain in the third trimester caused by the fetal head compressing on the maternal pelvic bone and nerves." Similarly, OB-GYN Amy Peters M.D., tells Romper in an email that "women describe it as a 'zing of pain' that comes and goes with maternal or fetal movement, particularly during the third trimester." Also over email, OB-GYN Mary O’Toole, M.D. provides a detailed description of why lightning crotch has that "zingy" feeling:

"[Lightning pain] is related to the pressure of the baby's head pushing against the cervix, and stimulating nerves in the cervix," she explains. "And as with any nerve that can be compressed, there can be a 'zing' of pain or shock or lightning-like feeling in the vagina. As the woman nears the end of pregnancy, the head compressing against the cervix may put extra pressure on a nerve or multiple nerves, and this may come and go as baby moves its head, or with maternal movements."

As for whether or not all that pain is a preview to labor itself, it might be — but it might not. "Lightning pain may be a precursor to labor but is not a sign of labor by itself," says Dr. Peters. “Labor symptoms include tightening of the abdomen (as firm as your forehead) all over, that comes and goes about three to five minutes apart, each lasting about a minute." If you experience lightning crotch at the beginning of labor, it's probably "related to the movements of the baby" and "may accompany the uterine contractions and simultaneously occur together," adds Dr. O'Toole. Just as lightning crotch on its own is painful, experiencing it in combination with uterine contractions can be very uncomfortable. Call your OB-GYN or midwife if you think you're in labor.

Now that you have a better understanding of lightning pain, here are some tips for coping with the discomfort. Since the primary culprit causing the pain is your kiddo’s head on your cervix, as TheBump.com reported, you’ll need to make your baby move, like now. If you experience a sudden stabbing feeling, you might want to switch up your stance. Dr. O'Toole suggests, "changing positions or sleeping with a pillow between your legs.” That can help your baby to move — and ease the pressure on your pelvic region. Adds Dr. Peters: “General supportive measures for normal discomforts of pregnancy include prenatal yoga/stretching, walking, swimming, wearing a pregnancy support belt, prenatal massage, relaxing shower, calcium/magnesium supplement, hydration, proper body mechanics/posture." But if you find that you can’t get any relief from lightning crotch, you might need to explore other alternatives. Additional options for relieving this pain include "physical therapy for pelvic floor relaxation techniques and acupuncture," says Dr. Tran.

While third trimester aches and pains are totally normal, nothing quite compares to the sudden strikes of lightning crotch. And while it might be really uncomfortable (and a total pain the, um, you know), knowing that the storm will soon pass — and that it’s ultimately a sign that your baby will soon be on its way — just might make the pain more tolerable.

Yen Tran, M.D., an OB-GYN at the MemorialCare Medical Group

More Like This
Are You Leaking Amniotic Fluid Or Is It Normal Discharge? Experts Explain
Are Boy Babies Usually Late? Signs Your Baby May Be Born Late
What Does Amniotic Fluid Smell Like? A Nurse Explains
New Report Shows 80% Of Pregnancy-Related Deaths Are Preventable

This article was originally published on Dec. 23, 2017