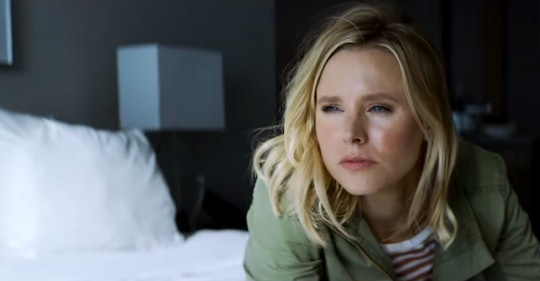 Netflix’s latest original movie, LIke Father, features comedy heavyweights Kelsey Grammar and Kristen Bell as an estranged father and daughter who end up on a honeymoon cruise together, after Bell’s character is left at the altar. The premise is perfect for a comedy film, which makes you wonder if the story is an original one. Many popular films have been adapted from novels, so is Like Father based on a book as well?

Like Father was not adapted from a book, and the screenplay was actually written by Lauren Miller Rogen, who is also the director of the film. According to Indie Wire, Miller Rogen wrote the screenplay after dealing with some family heartbreak of her own. She wasn't left at the altar by her husband Seth Rogen (who is also in the film), and her relationship with her father is great, but she did suffer through her mom's struggle with Alzheimer’s, so she incorporated her emotions into the script. “I write what I know a lot,” she told Indie Wire. “The anger, the acceptance, the rejection of reality. It just sort of crept in there. I needed to deal with my emotions and was just working really slowly because I had so much going on in my life.”

Since her mom’s diagnosis, Miller Rogen has been a huge advocate for raising awareness for Alzheimer’s. She founded a charity with Rogen in 2012 called Hilarity for Charity, which helps promote research, support, and awareness for the cause. And while the disease isn’t the main focus of Like Father, she told Indie Wire that it is at the heart of one of the movie’s subplots. “I’m a big believer in incorporating things that you want to become part of this sort of conversation into storytelling,” Miller Rogen said. “I think that things like cancer, HIV, and AIDS have been normalized because of being in movies and television so much, and I think that Alzheimer’s needs to become part of the normal conversation of diseases that we are actively fighting against every single day.”

With a cast that includes Seth Rogen, Kelsey Grammar, and Kristen Bell, you may think Like Father is a pure comedy. But it includes serious themes as well. Miller Rogen recently told Entertainment Weekly that she had written the “dramedy” during a time when she was experiencing emotional highs and lows, and managed to incorporate those emotions into the story line. “Because I think that everyone probably has high moments and low moments, and that’s what life is — the highs and the lows together,” she said. “I think that’s what a dramedy is — it’s the balance between the funny and the sad. It feels more sad because we were just laughing, and it feels funny because we need the release from how sad it just was. I love balancing the two because it feels real to who I am.”

In the trailer for Like Father, you can see the emotional journey that Bell and Grammar’s characters go through. After years of not seeing one another, the father and daughter are reunited when he surprisingly shows up to her wedding. After she gets stood up by her fiancé, she goes out drinking with her dad, and in a drunken stupor, the two decide that it would be a good idea to go on her honeymoon together. The premise of the film itself is funny, but it’s the bond the two form over the course of the movie that pulls at your heartstrings. An official synopsis for the adds that “The two depart as strangers, but over the course of a few adventures, a couple of umbrella-clad cocktails and a whole lot of soul-searching, they return with a renewed appreciation for family and life.”

So while Like Father was written as an original screenplay — with the all its heartbreak, emotions, and humor — I could easily see why some might assume it was adapted from a book. But all the credit goes to it’s writer and director, Miller Rogen, who poured her heart and soul into the project.