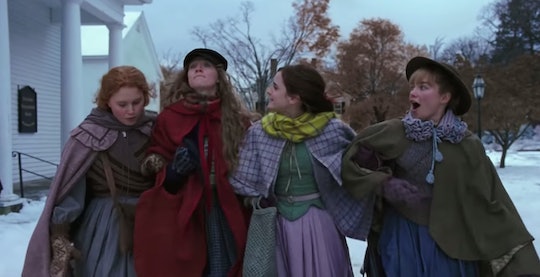 Is 'Little Women' Appropriate For Kids? Here's What Parents Need To Know

With the highly anticipated release of Little Women around the corner and kids who are enjoying some extended time off from school, parents may be considering a trip to the movie theater to help keep everyone entertained. But, before you buy those tickets, here's what you ned to know about whether Little Women is appropriate for little kids.

The remake of the classic, coming-of-age story hits theaters on Dec. 25, and the fact that Greta Gerwig is at the helm is reason enough to check out the film. But add to that its all-star lineup and Little Women is a must-see. Saoirse Ronan, Emma Watson, Florence Pugh, and Eliza Scanlen portray the March sisters in the film, which is set in the 1860s. Another Lady Bird star, Timothée Chalamet, co-stars as Laurie Laurence. To top it all off, Meryl Streep is Aunt March.

So far, the reviews for Little Women have been overwhelmingly favorable, with the film achieving a 96% rating and "certified fresh" on Rotten Tomatoes. And given that the kids are on holiday break — and parents may not be able to find childcare for a date night — it makes sense that moms and dads would consider bringing them along for the show. But how feasible is that, really?

For starters, the 2019 remake of Little Women is rated PG for "parental guidance." The movie earned this rating for "thematic elements and brief smoking," so it doesn't look like there's anything parents should be too concerned about.

It might be a good idea, though, to gauge your child's interest by showing them the official trailer for Little Women, which dropped back in August. Who knows? Maybe Saoirse Ronan as Joe in the trailer will be enough to pique their interest. This line in particular is pretty powerful: "Women, they have minds and they have souls as well as just hearts. And they’ve got ambition and they’ve got talent as well as just beauty. And I’m so sick of people saying that love is just all a woman is fit for."

Personally, I would love to expose my kids to the feminist themes in Little Women. (I'm not at all worried about the PG rating, either.) However, I doubt any of my kiddos (the oldest is 8) would last through the film, with a running time of 2 hours and 15 minutes. Then again, every kid is different.

Common Sense Media suggests Little Women is probably best for children 10 and up. But if you don't feel like paying a sitter — or you just want to see how it goes — there isn't anything horribly inappropriate parents have to be worried about, though it seems older kids would enjoy Little Women most.

More Like This
The Little Vampire Is Just Scary Enough
The Addams Family Is Not Exactly As Kid-Friendly As You Remember
Witchy Vibes, Salty Language, & More: What Parents Need To Know About Hocus Pocus 2
These Hocus Pocus Costumes Are Fit For The Whole Family, Even The Dog